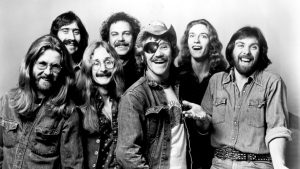 The other day, I was in a fast-casual restaurant that always plays Sirius-XM’s 1970s channel over the speakers. Perhaps the owner chose it because that’s the decade in which the parents of most of the employees were born.

At one point, a song came on that I hadn’t heard in quite some time — the 1972 hit, “Sylvia’s Mother,” by Dr. Hook and The Medicine Show. When it got to the lyric, “And the operator says 40 cents more for the next three minutes,” I wondered if the twenty-somethings around me had any idea what that meant.

For their entire lives, a phone has been something you carried around with you, not something you had to find on a street corner to use. Or had to insert change in a pay phone to have a call go through — or continue. Or used 411 to get someone’s number. Or, for that matter, dialed.

No one in Gen Z knows the automated number to find out the exact time and temperature. That information is available on their phones without having to call anyone.

Similarly, they’ve never told a sibling to get on the extension to join a call. They’d probably use their smartphones’ ability to merge calls — even if one of the parties was just upstairs in the same house.

Johnny Rivers: “Long distance operator give me Memphis, Tennessee.” Distance is no longer relevant when making a call, so why would you need an operator?

Foreigner: “Operator, if you’re givin’ me a bad time, I’m gonna tear this phone right off the wall.” Has anyone under 30 ever seen a phone on a wall, other than the ones on display at an Apple store?

The Marvellettes: “Beechwood 4-5789.” From a time when the first two digits became a word or abbreviation. I grew up in Roslyn Heights, so our number was HT4-0792. The local taxi service was Mayfair 1-1111. Come to think of it, this alphanumeric usage was already out of fashion by the time I got to high school.

Now, we live in a ten-digit nation. And a world where you have to text someone to get them to call you.

Incidentally, Shel Silverstein wrote “Sylvia’s Mother” after hearing a woman he had been in love with was leaving town to marry another guy. There’s video of Dr. Hook performing it on Shel’s houseboat a few years later, but I can’t embed it, so use this link.

Once you do, don’t blame me for the song becoming an earworm that’s stuck in your head the rest of the day.