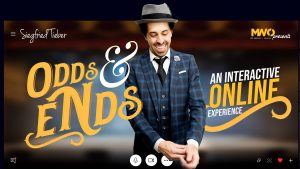 Saturday night, my wife and I went to a magic show — without leaving our house. We participated in an interactive show by magician Siegfried Tieber, a Magic Castle regular who we’d seen stump Penn & Teller on “Fool Us.”

There were about two dozen in the virtual audience via Zoom. We were instructed to keep our cameras on so Tieber could see our responses and call on us by name when he needed a participant in each trick. He’s a wide-eyed, exuberant, and affable sleight-of-hand magician who, after an opening coin-toss bit, stuck mostly to card tricks — and he’s quite a mechanic, able to manipulate the cards beautifully — while maintaining non-stop patter for a little over an hour. In that time, he interacted with just about all the viewers, including two other magicians he knew. Afterwards, he stayed on the Zoom feed to do Q&A for another 15 minutes.

Overall, I thought he adapted his act to a Zoom presentation very nicely. The intimate format is more amenable to the close-up stuff Tieber does than it would be for someone who does big stage illusions. He switched from a straight-on shot to an overheard camera a few times, used a couple of different sets, and had some silly interstitial footage to cover the changes. A ticket cost $40, but we only had to buy one since we watched it together. That’s a pretty good price for an hour of top-notch professional magic.

As for Tieber, he grossed about a thousand bucks for 90 minutes work. Even with the cost of the sets, the bandwidth, and whatever cut the producers took, he still came out ahead. At a time when he can’t tour and work live venues, he’s found a way to keep busy, create some income, and get people talking about him. There are a few other magicians doing their own online shows, but this was the first we’ve experienced.

We’ve already bought tickets to see another illusionist, Justin Willman, in a couple of weeks. I’ve watched several episodes of his Netflix show, and while I enjoyed them, I’m always wary of pre-recorded street magic, since the ability to edit the product changes it. That’s why I’m looking forward to seeing him work live.

Several musicians have also embraced the streaming concept, from Stone Temple Pilots to Nelly to Josh Groban to Brandi Carlile, and many more. It’s nice to know that in an era when we can’t go to see these performers in person, they’ll come to us.

And we don’t even have to worry about whether the other attendees are wearing face masks.