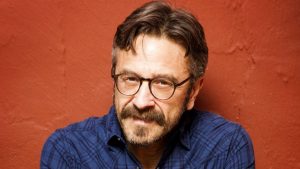 We went to see Marc Maron in his return to Helium Comedy Club this weekend and were not disappointed.

I’ve been a longtime fan of Maron’s, from his podcast to his TV show to his film roles, but it’s his standup that continues to impress me most. It’s not just that Maron is funny; it’s that he’s smart, too. Unafraid to discuss subjects like the death of his girlfriend, Lynn Shelton, his father’s dementia, or his fraught relationship with his mother, Maron finds the humor in the truly personal. But he also riffs on bigger issues like the pandemic, remembering the toilet paper panic of eighteen months ago, and the time he and a friend went to a gun store determined to buy Glocks for no apparent reason.

What I don’t understand is why Maron is still performing in comedy clubs when he could easily fill a couple of thousand seats in a venue like The Pageant in St. Louis. He should have graduated to one-nighters at theaters long ago — a la Kathleen Madigan, Brian Regan, and Jim Gaffigan — instead of long weekends of multiple shows for a few hundred people at a time. But perhaps Maron feels the need to work in more intimate settings, where he can better gauge reactions as he develops material for his next Netflix special.

That’s good for ticket-buyers like me, because we get to see him up close, where his relatability and wit are fully on display.

About an hour after I posted the above, Marc Maron replied:

I’m working out the new hour in the clubs in certain cities. Repetition, Improvising, honing. Theaters start later. Like this week in Portland and Seattle. I’ve graduated. Still need to do homework though.

I’m glad to hear that. It was great to see him working it out last weekend, and I look forward to the final product.