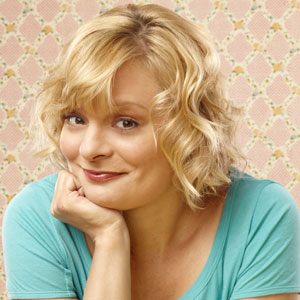 Here’s my America Weekend conversation with Martha Plimpton, who stars on the Friday night Fox series, “Raising Hope,” which just began its fouth season. She’s been nominated for an Emmy for playing Hope’s grandmother, Virginia Chance. She was also Emmy-nominated for a guest role on “Law and Order SVU,” won an Emmy for her guest role as Patti Nyholm on “The Good Wife,” was nominated for three consecutive Tony Awards, and has appeared in several dozen movies in her career, too.

I first noticed Plimpton 25 years ago when she played River Phoenix’s girlfriend in “Running On Empty” (with Judd Hirsch and Christine Lahti, directed by Sidney Lumet). We talked about that experience, as well as her guest appearances on “The Good Wife,” whether she prefers TV over movies, whether Cloris Leachman is as much of a handful on “Raising Hope” as she was on “The Mary Tyler Moore Show,” and how intense the set was when she worked with Robert DeNiro and Jane Fonda on “Stanley and Iris.”