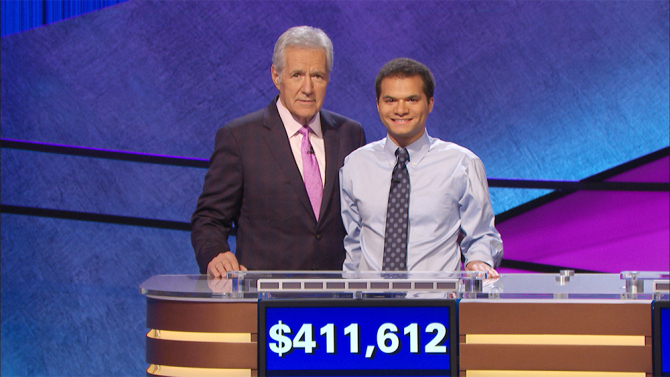 Matt Jackson’s run as “Jeopardy!” champion ended yesterday after 13 shows, during which he amassed winnings of $411,612, the fourth-highest total in the show’s regular-season history (not counting tournaments). He did it with an intense style, quick pacing, big Daily Double wagers, and a lot of knowledge across the various categories, which helped him blow away opponents before they even got to Final Jeopardy — at which point he “could not be caught.” Although he finally lost Wednesday, Jackson will be in the Tournament Of Champions that airs in November.

His style was reminiscent of Arthur Chu, who used similar strategies to put together an impressive “Jeopardy!” run last year. Chu was criticized by some fans for his no-nonsense style, but it worked, and Jackson clearly emulated them over the last two weeks. As for Chu, he wrote a piece for Salon a couple of days ago showing Jackson some serious respect:

To manage to do what you’re doing at your age is damn impressive. If, God willing, they ever invite me back on a “Battle of the Decades”-style reunion tournament I’ll likely have to face you with the reflexes of a 40-year-old while you have the reflexes of a 30-year-old, and crack up and embarrass myself all over again. I look forward to the experience.

The blessing and the curse in all of this is that Jeopardy! viewers in general, as opposed to the hardcore Jeopardy! nerds, have very short memories. I remember feeling like a shameless media attention hog for letting people shower credit on me for gameplay strategies I’d straight up ripped off from Roger Craig in 2010, Dave Madden in 2005 and Chuck Forrest in 1985 that most Jeopardy! viewers seemed to think was brand new. Now I see people saying the exact same things they said about me 20 months ago about you, as though neither I nor Julia Collins nor Ben Ingram ever existed.

Such is life, and such especially is life when you treat as a serious sport what most Americans treat as something they half-pay attention to while eating dinner.