Maz Jobrani Is Not A Terrorist 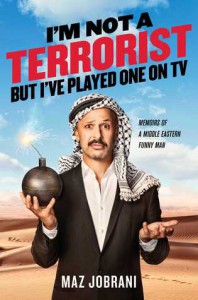 Here’s my conversation with Maz Jobrani, an Iranian-American comedian who writes about his life in “I’m Not A Terrorist, But I’ve Played One On TV.” I asked him about being typecast in those roles and when he decided he wouldn’t do them anymore. We also discussed how his family assimilated into American culture when the moved here during the Iranian revolution in 1978, and how different this country looked to his young eyes compared to the view he’d had in Iran. Maz also talked about his experiences taking the Axis Of Evil comedy tour to middle-eastern countries, where he had to be careful about the topics he and his fellow comics joked about.