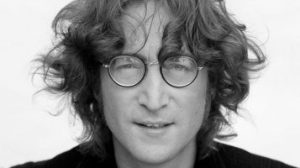 Forty years ago tonight, millions of Americans learned from Howard Cosell that John Lennon was dead. Cosell made the announcement towards the end of a Dolphins-Patriots game on ABC’s “Monday Night Football” — and I missed it.

At the time, I was the Program Director and morning co-host at WRCN, a rock station in Riverhead, New York. That Monday was a typical day for me, starting at 5am and lasting late into the afternoon before I went home. I had some dinner, then settled in front of the TV to watch the game. Sometime around 10:30pm, I was too tired to watch any longer, so I climbed into bed and quickly fell asleep.

My alarm went off Tuesday at 5am. Before getting out of bed or turning on the radio, I rolled over to the phone, as I usually did, to call our overnight guy, Freddy Wilkes, to ask him if he wanted anything from Jeski’s, the deli I always stopped at to grab the newspaper and some breakfast. When Freddy answered the hotline, I could tell by his voice he was upset. I asked what was wrong, and he said, “You haven’t heard?” “No,” I said. He took a deep breath and said, “John Lennon was shot and killed last night.”

I didn’t ask Freddy to repeat it. I knew he wasn’t kidding, and I knew he was emotionally worn out from dealing with this on the air since midnight. I hung up the phone, skipped the deli, and made the 12-minute drive to the station in 9 minutes. Just as I arrived, so did Don Brink, the other morning man and voice of sanity at the station. He didn’t say hello. The first thing out of his mouth was, “I think I know where the Paul McCartney interview is. I’ll pull that, you get any other audio you can.”

We did, and from then until 10am, we barely spoke to each other off the air, because we were too busy on the air — playing nothing but Beatles and Lennon music, taking phone call after phone call from bereaved fans, reporting on the crowd that had gathered around The Dakota, sharing our personal memories, and discussing the impact Lennon had on us and the world. Listeners who had heard the news from Cosell thanked him, while others explained how they, too, had been asleep and were first hearing about it from us.

As this anniversary approached, Don called me recently and we reminisced about that morning, which he considers the best radio show he was ever part of. I can’t disagree.

At 10am, Malcolm Gray took over for his midday show with more of the same, a nonstop tribute to the murdered Beatle. I went into the production studio, where Don and I cut up clips from all the audio we’d used that morning for Malcolm and the other jocks to intersperse in their shows. Since we were an ABC Radio News affiliate, I arranged for their correspondents to call in with updates from Manhattan and other places. Someone (I don’t remember who) thought of calling some local record stores, where the owners reported that they were quickly selling out of everything that Lennon had ever recorded. As the only “album rock” station in the market, listeners spontaneously showed up in the WRCN parking lot (not an easy thing to do, since our studios were out of the way, next to an abandoned movie drive-in with no sign out front). They stood around with car doors open and radios blasting, sharing their sorrow as they cried and sang along to the music we played.

Sometime around 3pm, it became clear to me that the on-air team had everything under control and I couldn’t think of anything else to do, so I left. As I drove home, I realized I hadn’t eaten anything that day, but I wasn’t hungry — the emptiness in my stomach wasn’t from a lack of food.

When I got home, I turned on the TV, where the three networks were covering the story. As I sat down to watch, I was overcome with exhaustion and emotion and I started to cry. I suppose adrenaline had kept me going all day without a chance to think about what Lennon’s death meant to me, but now the floodgates were open and I sat there with tears streaming down my face for several minutes.

The phone rang occasionally with questions from other WRCN staffers about when we should go back to our regular format (we didn’t, for two days), whether we’d carry a special message from Yoko Ono (we did, via the network), how we’d handle the moment of silence she was going to ask the world to observe later that week (with solemnity and respect), and on and on. Friends also called to say they’d been listening and liked what they’d heard, or just to talk.

Eventually, again, I drifted off to sleep, only to get up early the next morning and continue covering the story with our rock and roll community.

It didn’t occur to me until many years later that I had never seen the footage of Cosell’s alarming announcement on “Monday Night Football.” We had the audio of it from ABC Radio the next morning, but since there were no VCRs or DVRs or YouTube in 1980, when you missed a live TV event, you didn’t get a second chance.

Thankfully, in 2010, ESPN’s “Outside The Lines” did a show about how ABC got the scoop — one of their local news producers had been in a motorcycle accident in Central Park and just happened to be in the emergency room of Roosevelt Hospital when Lennon was brought in and later pronounced dead — so I finally saw how it was handled on the air and behind the scenes.

The best part is the tape of Howard Cosell and Frank Gifford discussing, during a commercial break, whether they should hold off on telling the audience until a potential game-winning field goal had been kicked, or even do it at all. It was Gifford who insisted that Cosell not wait to make the announcement that reverberated around the world.