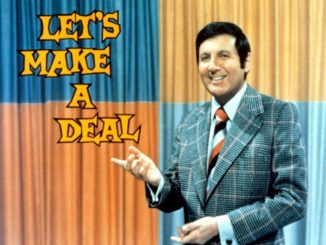 When I heard that Monty Hall, who co-created and hosted the classic TV game show, “Let’s Make A Deal,” died yesterday at age 96, I dove into my audio archives to find this conversation I had with him on August 30, 2001. At the time, the Game Show Network was beginning to air reruns of his show, and it wasn’t too long before CBS brought it back to life with new host Wayne Brady.

I remember this as a really fun interview, in which I asked Monty about the genesis of the show, the zonk prizes, announcer Jay Stewart, prize lady Carol Merrill, and the thousands of people who lined up in crazy costumes to try to get into the “Let’s Make A Deal” audience so they could get Monty’s attention and a few minutes of air time. Nowadays, that seems almost quaint, with everyone having the ability to be on camera and get exposure online anytime they want.

He is also the only game show host I know of who is associated with a classic probability question — it came be known as The Monty Hall Problem — which became famous when a reader wrote to “Parade” columnist Marilyn vos Savant in 1990:

Suppose you’re on a game show, and you’re given the choice of three doors: Behind one door is a car; behind the others, goats. You pick a door, say Number 1, and the host, who knows what’s behind the doors, opens another door, say Number 3, which has a goat. He then says to you, “Do you want to pick door Number 2?” Is it to your advantage to switch your choice?

As vos Savant explained, the answer is yes, you should always switch. If you want to know why, read this Wikipedia page.