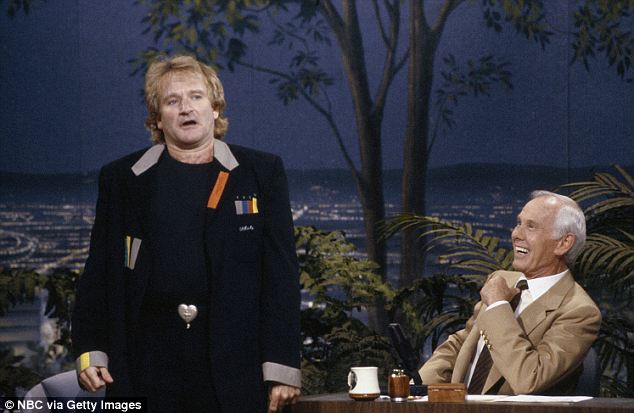 Last night, my daughter and I watched the DVD of Johnny Carson’s penultimate show. That historic hour still stands as the Best Late Night Talk Show ever telecast, with Bette Midler’s sentimental/comic musical tributes and a couple of segments of Robin Williams doing his thing from the guest chair and proving why he was the Best Talk Show Guest Ever.

It was a reaffirmation of Carson’s delight in watching Williams work, the respect the latter had for the former, and how each understood what this final showcase meant. In the 22 years since, Williams made plenty of late night appearances with various other hosts, usually to promote his latest movie and — despite the fact that those movies more often than not were stinkers — he never failed to deliver a superlative guest spot.

Though he was nominated for several Oscars (and won for Best Supporting Actor for “Good Will Hunting”), it was television that was the only medium that allowed Williams to truly shine. You couldn’t prove that by his last series, “The Crazy Ones,” but from “Mork and Mindy” through his HBO concerts through his guest appearances with Carson/Letterman/etc., it was only on TV that the rapid-fire talent of Williams was allowed to flourish.

Since his death, much has been written about how Williams was consumed by demons throughout his life. That’s nonsense. Calling the problems “demons” makes them seem supernatural, which they aren’t. The man had mental health issues, including serious depression, which in the end he was not able to overcome.

I know several people who struggle with depression. Most of them have it under control via medication, but at least one of them still hasn’t found the right prescription to fix an out-of-whack brain chemistry that has made daily life very difficult for a long time. There are millions of people dealing with these sometimes-debilitating issues, at every part of the mental health spectrum, and it’s a shame that our health-and-insurance system doesn’t do a better job making it easier and more affordable for them to get the help they need.

Mark Maron has re-released a remarkable conversation he had with Williams for his podcast in April, 2010. In it, Williams was open about his battles with alcohol and cocaine addiction, discussed the high and low points of his career, explained why he paid comedians he stole jokes from, and towards the end did an extended riff on the inner debate he had with his conscience when he considered suicide. It wasn’t a comedy bit — it was a fascinatingly honest glimpse into how troubled Williams was. Well worth a listen.

One last thing. I just read a report that Williams’ daughter, Zelda, has abandoned social media after she received “cruel and unnecessary” messages about her father’s death. One of the continuing problems of online life is having to deal with the sort of idiots who would anonymously take potshots at a woman in mourning over the loss of her father. Stay classy, internet!