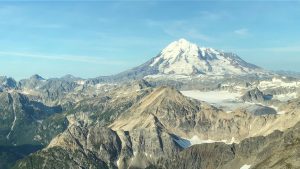 My post last week about our recent trip to Alaska engendered quite a few questions from readers who wanted to know more. So, here we go:

Q: Did you see any moose?

Everywhere we went, guides told us “this area usually has quite a few moose in it,” but we never saw one, just like on our Yellowstone trip a few years ago. The only possible exception would be while we were traveling north on the Alaska Railroad. I was in the open-air section of our train car with several other people, taking in the view from the left side. Suddenly, a woman behind me — on the right side — shouted “MOOSE!” It was so loud that Martha could hear her from our seats inside. I whipped my head around to see where the woman was pointing and saw, for about three-quarters of a second, a brownish blob in a pond off in the distance. Then my line of sight was blocked by the rest of the train. Was it a moose? I have no idea, but I don’t count it as a sighting.

Q: Are there moose strolling around downtown areas, like on the TV show “Northern Exposure”? What do you do if you come upon one?

We were told that it does happen, but since moose like to be around shrubs and berries they can eat, they tend to stay in wooded areas. While I was walking around a lake one morning with John, our guide, I asked him what we should do if we came upon a moose. He explained that, since they’re herbivores, moose don’t see us as food, but they are territorial and could charge us for no reason. Also, they really hate it if you point at their antlers and say, “Nice rack!” John added that, unlike bears — who you can talk to and effectively shoo away in many instances — the best thing to do with a moose is keep something large between you and them. I told John I’d have no problem standing behind him, to which he replied that he’d be behind a tree, and advised me to do the same. I never had a chance to take his advice, because the closest we came to a moose was when we saw a display of antlers that had been shed in the fall (they grow new ones every year).

Q: How cold was it when you stood on a glacier?

Cold enough that we needed our winter coats, knit hats, and gloves. And after about 15 minutes looking around in awe, Martha was so chilled she climbed back into the plane to warm up. Unfortunately, the doors were still open, so it didn’t help much. Our pilot, Lee Ann, told us about a family of four that had showed up at the airport in Talkeetna (where the flights originate) wearing t-shirts and shorts because it was an unusually warm day, about 65 degrees. But the air taxi employees wouldn’t let them go to the glacier dressed like that, so the family had to go back to their hotel, change clothes, then take the next flight. The climate’s a little different at altitudes of 10,000+ feet.

Q: Are restaurants and other businesses in Alaska affected by the same worker shortage we have here?

Finding employees for service jobs is always a tough task in Alaska because it doesn’t have much of a young population. That probably explains why every restaurant we went to had classic rock playing in the background — it fits the demographic of both the customers and the staff. Up until a few years ago, Alaskan businesses filled that gap by hiring young people from Eastern Europe who came in on J-1 visas. That changed under Trump, who choked the program nearly to death once he found out it involved foreigners. Then the pandemic hit and made things worse, with workers from other countries unable to enter the US. Thus, many restaurants in the towns we visited were either closed forever or working on limited schedules with signs requesting patience because of staff shortages.

Q: You wrote that many Alaskans have to get around by plane or boat because there are so few roads. Don’t they use snowmobiles, too?

Yes, except they call them “snow machines.” They are a major source of transportation in winter, when more than 6’ of snow is not unusual — in a single day! John told me that pretty much every snow machine he’s ever seen has had part of its seat torn off by bears who, for some reason, think the fiberglass filling will taste good. Some locals also get around with dog sled teams, but those animals tend to sink into soft snow, so the driver has to go out ahead of them to clear and tamp down the path before doubling back to get the team and move ahead with whatever they’re hauling — which I assume includes dog food!

Q: Since you’re a large human, did you have any problem fitting into the planes you boarded for your “flight seeing” adventures?

Let’s just say they’re correctly called “small” planes, which meant it was a struggle for me to get into a seat. But two of the bush pilots let me sit in the co-pilot seat, which had more space — and gave me a chance to check out the instrumentation. On another occasion, I sat far enough back that I had sufficient leg room for my 6’4″ body.  However, the size question did come into play on our ride up the Susitna River in a jet boat with an entranceway so low I had to duck way, way down. Squeezing through, I couldn’t resist saying to Eli, the captain, “You’re gonna need a taller boat.”