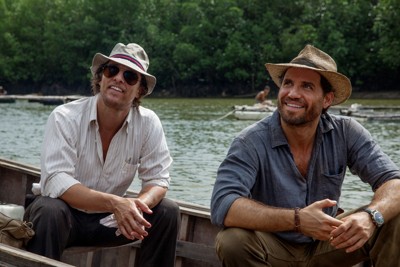 In “Gold,” Matthew McConaughey plays Kenny Wells, head of a mining company that hasn’t found anything valuable to mine in a long time. One night, he has a dream about finding lots of gold in Indonesia. He remembers an expert named Michael Acosta (Edgar Ramirez) who has a reputation for knowing where to dig to find valuable minerals and precious metals. So he flies to Jakarta, meets with Acosta, and the two begin an adventure in the jungle to find the gold.

Actually, “adventure in the jungle” makes the movie sound more exciting than it really is. There’s very little time spent poking in the dirt. Instead, “Gold” has too many scenes in offices and board rooms where Wells and other speculators talk about raising capital, selling shares in the company, and boosting stock prices.

McConaughey puts everything he has into the role of Wells. He gained lots of weight and shaved his head to achieve a look that seems taken directly from Christian Bale in “American Hustle” (Bale was originally going to play Wells before wisely, um, bailing). Too bad that McConaughey’s fast-talking, always-smoking character doesn’t have much charisma. I never liked him or rooted for him.

The movie includes a couple of twists I won’t spoil, but I will say I saw them coming a mile away — and I never know what’s coming up in terms of surprises in movies like my wife does. If I can spot the turn before the movie gets there, something’s wrong.

“Gold” has a strong supporting cast, including Bryce Dallas Howard, Corey Stoll, Stacy Keach, Bruce Greenwood, Craig T. Nelson and Bill Camp (he was Detective Box on HBO’s “The Night Of”). Unfortunately, they’re caught up in a plot that — while based on a true story — is murkier than an Indonesian river during a downpour.