The Culture Of Lying 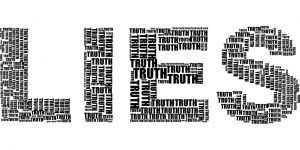 Lately, I’ve been thinking about lying. I don’t mean I’m considering telling a lie. I’ve been musing about the culture of lying that has grown so large in America.

When I started out in broadcasting, I was expected to only say things that were true. It was relatively easy, because I’m an honest person who didn’t see any upside to spouting falsehoods. Besides, there weren’t many opportunities to do so in a music radio format. Moreover, if I did say something that was wrong, even inadvertently, the phone lines would light up immediately with people correcting me.

By the time I’d been in the business a decade, and was doing a highly-rated morning show in Washington, DC, I used that instant feedback as sort of a lie detector. If I (or anyone else on my show) said something that wasn’t right, I knew right away with just a glance at the phones. On the other hand, if one person called to correct me, but no one else did, I was more likely to have been right.

In that pre-internet age, the audience was such a good gauge of information that I started referring to them as The World’s Most Intelligent Listeners. I joked one day that I could ask for the atomic weight of boron, and several people would call to give me the answer within seconds. By the way, when they did, I had no idea whether they were right or wrong, because I don’t know the atomic weight of anything, or even what atomic weight means. However, if three or four of them in a row repeated the same number, it was guaranteed to be accurate.

In modern times, of course, I could simply Google the matter and have an answer even faster. But it goes further than that. I wouldn’t trust today’s listeners to know what they’re talking about as much as I did those of 30+ years ago, because the base of common knowledge has been diminished by those who provide “alternate facts” or equate opinions with truths. That’s one of a slew of reasons I’m glad I’m no longer on the air interacting with the public. The culture of lying has made them unreliable respondents. You can’t depend on an ad hoc group of fact-checkers when they can’t even agree on facts.

Of course, the ultimate transgressor in this category is the man I refer to as the Liar-In-Chief. That’s not to say Trump is the first president to lie to the American public. There are myriad examples just from my lifetime: Lyndon Johnson did it with the Gulf Of Tonkin; Richard Nixon did it with Watergate; Bill Clinton did it when he claimed he hadn’t had sex with an intern; and George W. Bush did it in the buildup to the war in Iraq.

Yet none of them spewed untruth after untruth nearly as often as the current White House resident does, without apology and with psychopathic disregard for what’s right and what’s wrong. He even has his own group of sycophants who double down on his bullshit claims — and get invited onto formerly prestigious news programs to do so! If I hosted or produced those shows, there’s no way I’d allow repeat offenders like Kellyanne Conway or Larry Kudlow or Kayleigh McEnany on the air, because even if you debunk their claims in real time, you’ve still given them access to millions of people.

I felt the same way last week when Anderson Cooper was widely praised for “taking down” the My Pillow guy, a heavy Trump supporter who was making unsubstantiated claims about some coronavirus cure. Yes, Cooper challenged him repeatedly, but the next day, Google searches for the unproven cure multiplied a hundred-fold. In other words, viewers fell for the nonsense even after it had been shot full of holes on CNN. I bet many of them went out and ordered the “cure,” much as they drank bleach and injected themselves with Lysol after Trump suggested it in a press conference that was aired live (another media error). What Cooper and other broadcasters repeatedly ignore is that, by shining a light on something, they give it the imprimatur of reason, even when they’re trying to dissuade viewers from believing it.

Worse is when Trump makes claims that go unchallenged by couching them in modifiers like “I’ve heard…” or “People are saying….” Every time he utters those phrases, I wish a reporter would stop him and ask, “Where did you hear that?” or “Who told you that?” or “Which people said that?” For a guy who rails about the use of anonymous sources, claiming they’re all fake, he uses plenty of his own invention.

This living example of the fish that stinks from the head down will be on grand display over the next four nights at the Republican National Convention, where he’ll get free media exposure to repeat his fibs and create a whole new batch. We know the effect that’s had on the populace, which believes those lies and then redistributes them via social media in enormous quantities.

As I’ve thought about the culture of lying, I’ve wondered how it’s imprinting on our youngest generations, the kids who have grown up hearing babbling broadcasters and powerful politicians fomenting fear and rage with their fabrications. Are they telling more lies to their parents and teachers? Do those authority figures give the children passes because “everyone does it”? What if one of the adults in the house is an egregious offender — does Melania let Barron get away with it?

When it comes to those broadcast and cable outlets and website (InfoWars and its ilk), whose businesses are built on mountains of falsehoods, where excuses are given daily to a chief executive who’s been caught in lie after lie, are employees allowed to get away with deceiving each other and their bosses more easily?

Does that trickle down to other for-profit concerns? Does it make it okay for the Houston Astros or New England Patriots to cheat their ways to victory? Is it acceptable for a lawn maintenance company to charge a homeowner for mowing the grass even when it obviously hadn’t? Would we look the other way if Alex Trebek lied about a Final Jeopardy answer so his favorite contestant could win?

I know. It’s one thing to discuss the impact of the culture of lying on our everyday lives, but mentioning America’s most-beloved game show host in the same breath is going too far. So, if I may borrow a line from the character Hagrid in the Harry Potter stories, I’ll leave you with something you’ll never hear the politicians or media loudmouths or online pundits say publicly.

I’m sorry, I shouldn’t have said that.