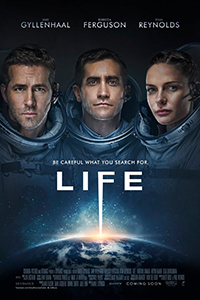 “Life” stars Jake Gyllenhaal, Ryan Reynolds, and four other actors you’ve never heard of, as astronauts and scientists on the International Space Station, where soil samples have been brought back from Mars containing a single-cell organism, the first known non-Earth life form. It appears to be a frozen state of animation, so one of the scientists tries all sorts of things to see if he can get it to come to life and, of course, that turns out to be a bad idea.

I do like the idea of testing the organism in space before it gets back to Earth to make sure it won’t be harmful to humans — sort of an “Andromeda Strain” Wildfire station a hundred miles up. But from there, “Life” is like an “Alien” remake, as the the creature devours the crew members one by one. Of course, they’ve lost communication with Earth (because that happens all the time), although I’m not sure what anyone at mission control could do to stop the alien from killing the crew.

My biggest problem with “Life” is its failed logic. I’m willing to go along with whatever rules you set up for your movie, but then the movie must live by them. My biggest pet peeve in this regard was in “ET: The Extraterrestrial,” where we were told that the germs (or something) on Earth were fatal to ET’s system, so it died. But then, it came back to life, with no explanation of how that’s possible. Similarly, in “Life,” we’re told that the alien can’t live without oxygen, and yet, it gets outside the space station to attack a crew member in space where there is no oxygen without any ill effects. Moreover, the damned thing lived on Mars, which also has no oxygen. So, WTF?

I won’t give away the ending of “Life,” but I will say they blew their chance at a sequel. Oh, and while the credits roll, we’re once again serenaded by Norman Greenbaum’s 1969 one-hit wonder, “Spirit In The Sky,” a song that’s already been used in dozens of other movies and TV shows (check this partial list). The fee for using it must be ridiculously low.

The action in “Life” is very predictable, but I admit I was scared and grossed out a couple of times, and the claustrophobic cinematography inside the space station is well done, particularly scenes with the crew floating from one compartment to another. However, the filmmakers missed a big opportunity to lighten things up. Shortly after its discovery, the alien creature is named Calvin — yet not one member of the crew is named Hobbes.