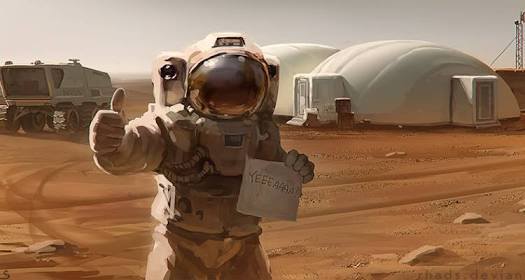 “The Martian” is a very good movie, one of my favorites this year. It is also the best STEM movie since “Apollo 13.” While Matt Damon gives a terrific performance as an astronaut stranded on Mars when he’s left behind by the crew that believes he’s dead, it is the combination of science, technology, engineering, and math that makes the film so good.

From the moment he realizes his dire situation, Damon’s character endeavors to “work the problem” (a phrase unknown to members of Congress) and there are lots of them to solve. Simultaneously, his colleagues on Earth at NASA and the JPL are also attacking those challenges, and it is fascinating to see that brain trust of very smart people figuring out how to get him back safely, while also protecting the lives of the other five mission members, and the public face of NASA, too.

While all that STEM work is going on, there’s still the human story, and we need a plot device to help us understand what Damon is doing while all alone 34.5 million miles from home. In “Cast Away,” Tom Hanks had Wilson, the volleyball he could talk to. In “The Martian,” Damon keeps a video log running, and talks directly into the camera to explain to us how he’s growing food, creating water, and re-engineering his Rover to travel greater distances. Not only does it work to advance the story, it also allows for some moments of humor and humanity.

For a little while, I wondered whether we were heading into “Capricorn One” territory. That was a cheesy 1977 movie starring James Brolin, Sam Waterston, and OJ Simpson (!) as astronauts who are supposed to go to Mars, but when NASA’s funding is cut, they can’t make the trip, so they’re forced to fake it on a soundstage. When something goes wrong that would have killed the astronauts in space, the NASA administrator (Hal Holbrook) realizes that those three can never be seen in public again or the agency’s image would be irreparably damaged. So Brolin, Waterston, and Simpson have to die — or escape. If there were any doubt this was a movie made in the 1970s, you’d just have to look at the rest of the cast list: Elliott Gould, Brenda Vaccaro, Telly Savalas, Karen Black, David Huddleston, David Doyle, Denise Nicholas, Robert Walden, and James B. Sikking.

Remembering that movie while watching “The Martian,” I wondered whether this version of NASA was going to try to cover up the fact that Damon was still alive and plan on leaving him there to die, only to have the crew find out somehow, then disobey orders and go back to Mars to retrieve him. Oh, perhaps I’ve said too much. Don’t worry, I didn’t just spoil the whole movie for you.

I have a couple of small nits to pick, however.

After “Apollo 13” was a hit, the flight director for that mission, Gene Kranz (played by Ed Harris) wrote a book about his career called “Failure Is Not An Option.” It was a great read, and I had him on my show in August, 2000, to discuss it. One of the things I asked him about was the scene in which the crew has survived re-entry and is safely returning to Earth — the entire room erupts in joy, with people standing up, cheering, and applauding. I asked Gene if that happened in real life. His response: “No. If anyone ever did that in mission control, that would be the last mission they ever worked.”

Still, I’m willing to accept it in the context of both movies for dramatic effect, as I am the scenes in “The Martian” of people all over the world gathering in Times Square and other large central-city locales to watch the latest updates on Damon’s Mars adventure. I don’t know of any time — other than a sporting event like the World Cup — where large groups of people came together to view a news story on big screens. We may all be watching on TV, as we did on 9/01, but we’re at home, or at work, or using those screens in our pockets. Sure, after a big event, people might gather to share the moment (e.g. the crowd that formed in Lafayette Square opposite the White House on the night Obama announced the death of Osama Bin Laden), but we’re not standing around in those places waiting for the latest update on a news story, no matter how big. Again, I understand why director Ridley Scott included those scenes, but they rang false for me.

That said, “The Martian” is still a helluva ride. It is what big-screen movie entertainment is all about. Hopefully, it will also inspire some younger viewers to pursue a path in the STEM fields. Because if we’re going to try to send humans to Mars in the near future, we’re going to need their brain power to make it happen — and get them back home safely.