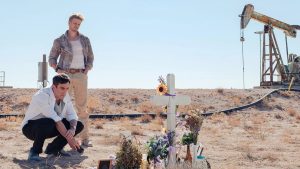 Let’s start with the fact that “Vengeance” is a terrible title for this movie, because it sounds like a Liam Neeson movie full of action, which this has none of.

Instead, it’s the story of Ben (BJ Novak from “The Office”), a writer for the New Yorker magazine and wannabe podcaster. One night, he gets a call from a guy he doesn’t know telling him that Ben’s girlfriend, Abby, has died. Ben’s confused, because he doesn’t remember having a girlfriend by that name, but finds some pictures on Instagram and remembers that he did hook up a few times with someone by that name. The caller, her brother Ty, and the rest of the family are convinced Ben and Abby had more than a casual relationship, so he reluctantly agrees to travel to west Texas for her funeral.

Once there, Ty explains that he doesn’t believe that Abby died of an overdose. He’s sure she was murdered. When Ben asks what he bases that conclusion on, Ty says it’s just a gut feeling. The more he listens, the more Ben realizes this would make a great story for a podcast series, especially since dead white girls are the hottest thing in online murder-mystery audio.

Ben agrees to hang out for a couple of weeks with Ty and the family to investigate and record whoever will talk with him about what happened to Abby. This is where the fish-out-of-water angle kicks into high gear. Ben’s a Jewish guy from Brooklyn who knows nothing about the culture of the people in this Texas town, just as they know nothing about him.

If this movie had been made twenty years ago, before podcasts became a thing, Ben would have been a young journalist working on a magazine piece or a newspaper feature. It has many of the same beats as movies of that genre (e.g. “Absence of Malice,” “His Girl Friday,” “State of Play”). We even see his producer, Eloise (Issa Rae), picking out the best pieces of Ben’s audio and encouraging him as a print editor would.

I have nothing bad to say about the relative unknowns who play Abby’s family and friends. They’re all completely believable and well-cast. One of the best performances is by Ashton Kutcher as a music producer who worked with Abby in his studio and has some interesting theories about everyone wanting to leave behind records of our lives.

John Mayer shows up in the first scene as Ben’s bro-buddy at a party where the two exchange the phrase “a hundred percent” at least a dozen times. There’s also an uncredited voice appearance by Terry Gross of NPR’s “Fresh Air” as a successful podcaster who shows interest in Ben’s story for her show.

Unfortunately, writer/director/star Novak leans a little too much on cheap stereotypes of both Ben and the Texans he comes across. He tries to make points about the small-mindedness of people in the middle of nowhere and their tendency to buy into conspiracy theories, but the script pushes too hard on that front. Worse, there’s a moment at the climax that is completely out of character, almost as if he couldn’t think of any other way to resolve the story.

It’s a surprise to find a small movie like this getting a big screen release, as it would seem more suited to streaming on Netflix or HBO Max. Perhaps its distributors think the misdirection of its title will bring in moviegoers expecting car chases and gunfights. If so, they’ll be disappointed, just as I was even though I had different expectations.

I can’t quite find a way to recommend “Vengeance,” so I’m giving it a 5 out of 10. Opens in theaters today.