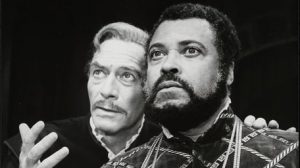 When I heard yesterday that Christopher Plummer had died at 91, I racked my brain to come up with a story about him.

Sure, I’d enjoyed his work on the big screen in “The Sound Of Music,” “Knives Out” (my review is here), “Inside Man,” and as Mike Wallace in “The Insider.” I was also happy for Plummer when he won a well-deserved Oscar for “Beginners,” and very impressed by his work in “All The Money In The World” (my review is here), when he stepped in after Kevin Spacey was fired. But which of those should I write about today?

Then it hit me. My best memory of Plummer was not for one of his many movie roles over the last 6+ decades, but for a single stage performance in August, 1981.

At the time, I was working at a radio station in Hartford. My parents called to say they were going to get tickets to see “Othello” at the American Shakespeare Theater in Stratford, Connecticut, and invited me to join them. I demurred at first because of my absolute ignorance of all things Shakespeare. To this day, when the playwright’s name comes up in a “Jeopardy!” category, I always assume I won’t know any of the answers because I wasn’t paying attention when I was taught about him by my high school English teachers.

Then my mother told me two things: 1) she and my father would fill me in on the basics of “Othello” beforehand; and 2) the stars would be James Earl Jones and Christopher Plummer. That did it, I was in.

On the appointed day, I drove down to meet them and discovered they’d gotten tickets just a few rows from the stage. This was an era when most theatrical productions did not have microphones on the actors, who therefore had to speak loudly enough to fill the theater all the way to the back row. Doing so, I learned that evening, also caused large amounts of saliva to be spewed from their mouths. Jones and Plummer were both prodigious sprayers, so much so that anyone in the first few rows ended up nearly as soaked as if they had gone to a Gallagher performance.

Fortunately, we were just outside the saliva splatter zone, so we remained dry. That allowed me to concentrate on the play and be absolutely riveted by what the two lead actors were doing on stage. Both of their performances remain among the greatest I have ever seen in person, with Plummer particularly brilliant.

So, you can have your Captain Von Trapp or Harlan Thrombey or Arthur Case. My memory of Christopher Plummer is of watching him in that theater forty years ago, as he fulfilled every aspect of the scoundrel Iago’s malevolence.

And gave me exactly one Shakespeare play I can answer a “Jeopardy!” question about.

P.S. A Twitter follower of mine named Alan wrote, “Saw that same production when I was in college in Connecticut, and still have the Playbill — an absolutely amazing show! BTW, Dianne Wiest was Desdemona and Kelsey Grammer was Cassio!”