My Dinner With Gallagher, Part 3 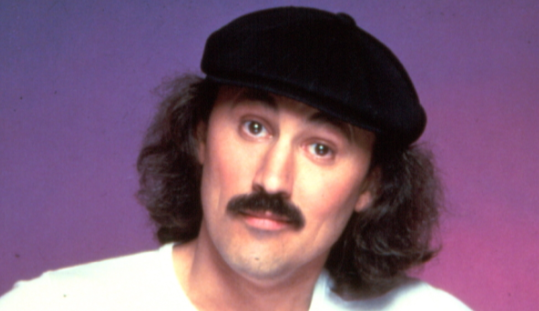 By the time Gallagher got back from rehearsing for the national high school cheerleading champioships TV special at Magic Mountain, an hour had passed and the drizzle had started again. Gallagher told Charlie Callas, with whom he was sharing a trailer/dressing room, that the TV crew was going to have to tape some of the cheerleaders in the rain, a phrase that Callas immediately improvised into a song, complete with filthy lyrics that had us on the floor. Before long, there was another break in the clouds, and the decision was made to record both comedians’ segments right away, while there were still people in the crowd.

Gallagher went first, as Robin and I watched from the bleachers. The crowd loved him, especially when he brought out the Sledge-O-Matic. I could see why his star was rising. He had presence, rapport with the audience, and terrific camera presence. Plus, he was really funny.

He did his ten minutes and left the stage to a roaring ovation. I wanted to stick around to see Callas’ act, but since I was Gallagher’s guest and hadn’t spent much time with him – and he was my only ride – I returned to the trailer with him. He quickly packed up his stuff, loaded it into the limo, and we drove home. He asked my opinion of his act, and I told him how much I’d enjoyed it. He said I should see his whole show sometime, and I promised I would.

When we returned to his house, I thanked Gallagher for everything and told him this was all pretty cool for a 22-year-old guy from a small market radio station. He said it wouldn’t be long before I moved onto a bigger city, and he hoped to see me there.

Eighteen months later, I did see him again, backstage at the Bushnell Auditorium in Hartford, Connecticut. By this time, he’d done another Showtime special and his fan base had grown considerably. He’d left small comedy clubs behind and was now playing theaters. My career had progressed, too, as I was now on WHCN, the leading rock station in the state. I didn’t know if Gallagher would remember me, but I stopped by to say hello before the show and, sure enough, he greeted me warmly again, and then insisted I go out and introduce him to the crowd of 3,000.

I did, and then watched him from a seat a safe distance away from the watermelon guts and other effluvia he sent flying during the Sledge-O-Matic finale. He was thoroughly entertaining, a real crowd-pleaser, and a helluva nice guy.

That was the last time I saw Gallagher in person. He went on to do many more Showtime specials, but I stopped watching, sad to see that he relied more and more on props and less on his verbal wit as the years went by – Sledge-O-Matic seemed to take up more than half his stage time. He also became more caustic (the lawsuit against his brother and the derision from fellow comics probably didn’t help) and in the last few years, beyond his peak, he’d been forced to return to those clubs where he’d started.

I have no idea what his act looked like before his medical problems caused him to get off the road, but I do know that there was a time when Gallagher made me laugh, a lot, both onstage and off.