I had a “Jeopardy!” flashback last week.

In 1967, my mother lasted four days as a contestant on the show until being stumped by the Final Jeopardy answer: “T stands for this in Booker T. Washington’s name.” Mom couldn’t come up with the correct question (“What is Taliaferro?”), but another player did, so her run ended. She won $1,950. At the time, the value of the clues ranged from $10 to $100. Today, the cheapest clue is worth $200, so the money Mom won in 1967 would be equivalent to almost $40,000 today (not counting inflation!).

Another difference is that in the original version of “Jeopardy!” contestants could ring in as soon as they knew the answer, rather than waiting for the host, Art Fleming, to finish reading the clue as they must in the current version. That meant you not only had to figure out the answer quickly, you had to be even faster on the button than today’s contestants.

Unfortunately, there was no technology available at the time that would have allowed us to record the shows and save them for posterity, and NBC didn’t save the old tapes. The show then aired in the middle of the day, so I would have missed it while at elementary school, but luckily, the network broadcast her episodes in the week that we had a school vacation, so my brother and I could sit with her in amazement in front of our black-and-white TV as Mom kept coming up with correct questions and knocking off competitors.

The cash Mom won is long gone, as is the “Jeopardy!” home game she received, along with the other prize, Compton’s Pictured Encyclopedia, which sat for a very long time on a shelf upstairs in my old bedroom. At the time, we needed an encyclopedia — a luxury we couldn’t afford — so my brother and I could “research” things for school (remember, there was no internet at the time). I’m fairly sure that many of the paragraphs composed by Compton’s writers ended up in essays I submitted to my elementary school teachers.

In all the years I’ve been watching “Jeopardy!” since, I don’t recall the subject of Washington’s middle initial coming up again until last week. I’m positive Mom would have gotten it right if the clue had been phrased this way 55 years ago: 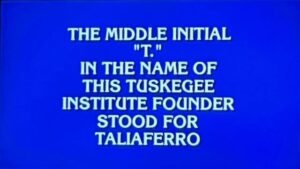