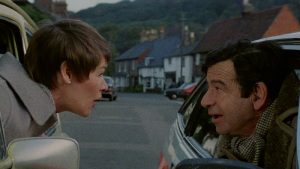 I have just re-watched one of my all-time favorites, the 1980 spy comedy, “Hopscotch,” and am finally giving it a spot on my Movies You Might Not Know list.

As “Hopscotch” begins, Miles Kendig (Walter Matthau), the chief of CIA activity in Europe, is overseeing the interception of some sensitive material that’s being passed on to the KGB. When it’s over, and his underlings have arrested the Soviets, Kendig confronts his Russian counterpart, Mikhail Yaskov (Herbert Lom). Yaskov suggests he might make a run for it, but Kendig replies that would only make both of them look silly, running around at their age. Yaskov agrees and hands over the purloined evidence.

When he gets back to Washington, the new boss at the CIA, GP Myerson (Ned Beatty), is not happy that Kendig let Yaskov go. Despite Kendig’s explanation that having Yaskov remain in his position is a good thing because the former knows the latter’s moves so well, Myerson will not be convinced. He pulls Kendig’s European job out from under him and reassigns him to a desk job at CIA headquarters, replacing him with Joe Cutter (Sam Waterston), who’d been trained by Kendig.

Kendig decides he will not go easily, choosing instead to quit and begin writing his memoirs, detailing all the dirty tricks and schemes he’s been involved with in his decades at the agency — and naming names. This engrages Myerson even further. Kendig makes his was to Salzburg, Austria, to stay with his longtime love, Isobel von Schönenberg (Glenda Jackson), who assists him in his plans to stay one step ahead of Myerson, Cutter, and other CIA agents, including Leonard Ross, played by the star’s son, David Matthau. There’s also an appearance late in the film by Matthau’s stepdaughter, Lucy Saroyan, as a private plane pilot.

This is Matthau at his best, whether he’s singing “Figaro” as he crosses a border or pronouncing “driveway” in a truly terrible southern accent (it comes out “drahvway”). His hangdog face, casual demeanor, and seen-it-all attitude play perfectly against Jackson’s warmth and sarcastic professionalism. Their first scene together, a lengthy exchange at an outdoor cafe about the importance of wine, is the standard by which all other witty rom-com dialogue should be measured. Watching it delivered effortlessly by two veterans like Matthau and Jackson only raises the bar.

To tell you more about the adventure would be to give away too much, except to say that director Ronald Neame wisely recognized that he didn’t need to include several-minute-long car chases and action sequences. What makes “Hopscotch” work is great actors performing a brilliant script (by Brian Garfield, on whose novel the movie is based, and Bryan Forbes) while having a really good time. The result is one of the most enjoyable spy comedies ever made.