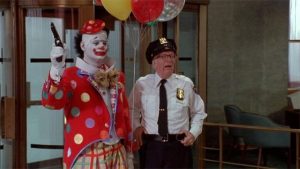 Bill Murray has starred (and co-starred) in lots of movies, but he only directed one: “Quick Change.” Technically, he co-directed it with Howard Franklin, but it was Murray’s vision that was apparent throughout the film, which he produced, too.

Murray played the lead character, Grimm, whose name was also his view of life in New York City. Desperate to go somewhere else, he dressed as a clown and robbed a bank with his girlfriend Phyllis (Geena Davis) and longtime friend Loomis (Randy Quaid). The bank robbery — which included Bob Elliott as the guard — was pretty clever and amusing, but not to police chief Rotzinger (Jason Robards), who was called to the scene because there were a bunch of hostages in the bank.

Grimm and his accomplices stole something like a million bucks and managed to get out of the bank without attracting much attention, but escaping New York turned out to be a lot harder. They got lost on the way to the airport, were ripped off by a roadside con man, and lost their suitcases — and car. Then they had to deal with an intense cab driver who spoke very little English (Tony Shalhoub), the most by-the-book and by-the-clock bus driver anyone has ever encountered (Philip Bosco), and some mobsters (Stanley Tucci and Kurtwood Smith).

“Quick Change” was a bomb when it was released in theaters in 1990, but I enjoyed it a lot then — and when I watched it again recently. Franklin’s script gave Davis a few unnecessarily melodramatic scenes and Quaid overplayed his part, but Murray was simply perfect as a man besieged by idiots and frustrations, one after another. No one has ever been more casual and bemused while pulling off a robbery. The supporting cast member, who included Phil Hartman, Reg E. Cathey, and Jamey Sheridan, were all solid. As for Robards, if you’ll pardon the pun, he was money in the bank in every shot.