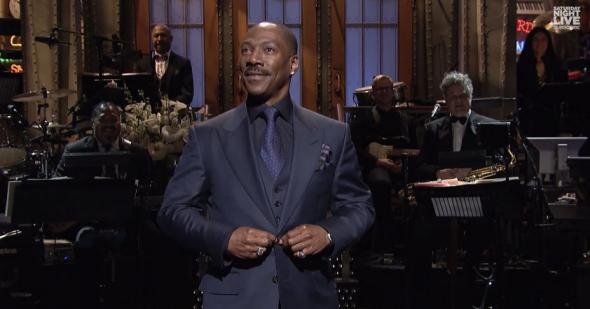 I was never a big Norm MacDonald fan, but I liked his Burt Reynolds impression and was happy to see him reprise it as part of the “Celebrity Jeopardy” skit on SNL’s 40th anniversary show Sunday night. What I did not know is that MacDonald wrote the skit with Steve Higgins, who is not only an SNL producer, but also announcer/sidekick for Jimmy Fallon’s “Tonight Show.”

MacDonald has written about that experience, with lots of behind-the-scenes details, including the fact that they wanted Eddie Murphy to play Bill Cosby in the Video Daily Double cameo (which Kenan Thompson ended up doing). MacDonald writes:

We see Eddie from 100 yards away. Rock says, “There he is. Like Ali in Zaire.” Eddie, Bomaye. It’s my job to talk him in to doing Jeopardy. We talk in his dressing room a good hour. When it’s over, I’m convinced he’ll do it. He doesn’t. He knew the laughs would bring the house down. Eddie Murphy knows what will work on SNL better than any one. Eddie decides the laughs are not worth it. He will not kick a man when he is down. Eddie Murphy, I realize, is not like the rest of us. Eddie does not need the laughs. Eddie Murphy is the coolest, a rock star even in a room with actual rock stars.

If, as MacDonald wrote, Murphy doesn’t need the laughs anymore, he certainly proved it Sunday night. And I can’t imagine any producer/writer/director watching his tepid appearance and thinking, “I want to be in business with Eddie Murphy!”