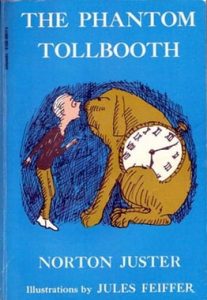 I was sad to hear of the death at 91 of Norton Juster, author of what I consider the greatest book of all time, “The Phantom Tollbooth.”

Here’s how the book is aptly described on Wikipedia:

“The Phantom Tollbooth” is a children’s fantasy adventure novel written by Norton Juster with illustrations by Jules Feiffer, published in 1961 by Random House (USA). It tells the story of a bored young boy named Milo who unexpectedly receives a magic tollbooth one afternoon and, having nothing better to do, drives through it in his toy car, transporting him to the Kingdom of Wisdom, once prosperous but now troubled. There, he acquires two faithful companions, a dog named Tock and the Humbug, and goes on a quest to restore to the kingdom its exiled princesses—named Rhyme and Reason—from the Castle in the Air. In the process, he learns valuable lessons, finding a love of learning. The text is full of puns and wordplay, such as when Milo unintentionally jumps to Conclusions, an island in Wisdom, thus exploring the literal meanings of idioms.

I was introduced to the book as a kid and loved it so much I devoured it, over and over again. Reading a book dedicated to rational thinking, but with a subversive sense of humor, lit up my young mind. When my daughter was old enough to understand it, I read “The Phantom Tollbooth” to her, and it immediately became one of her favorites, too. To this day, like her father, she enjoys playing with language, recognizing patterns, and imagining worlds full of wise, weird creatures.

I’ll leave it to others to supply a full obituary of Juster, but I must mention The Garibaldi Society, which he created for the express purpose of rejecting anyone who applied for membership. He also wrote another kid-lit classic, “The Dot and the Line.”

As for “The Phantom Tollbooth,” it was turned into an animated short by the legendary Chuck Jones in 1969 and, later, a stage musical with lyrics by Sheldon Harnick (“Fiddler On The Roof”). But neither of them was a good way to enjoy the story of Milo’s adventures compared to the book, which — through Juster’s words and Feiffer’s art — let your imagination run wild. Over the last decade, there have been efforts to adapt it for a feature film, but no one’s been able to get the script right, so it has bounced around from studio to studio. I hope it never gets made.

In 2011, in an interview on NPR, Juster was asked why, decades after it was first published, “The Phantom Tollbooth” remains so popular. He replied:

When I grew up I still felt like that puzzled kid—disconnected, disinterested and confused. There was no rhyme or reason in his life. My thoughts focused on him, and I began writing about his childhood, which was really mine … Today’s world of texting and tweeting is quite a different place, but children are still the same as they’ve always been. They still get bored and confused, and still struggle to figure out the important questions of life. Well, one thing has changed: As many states eliminate tolls on highways, some children may never encounter a real tollbooth. Luckily there are other routes to the Lands Beyond. And it is possible to seek them, and fun to try.

If you’ve never read “The Phantom Tollbooth,” get a copy and dig in. Better yet, read it out loud to a child you love.