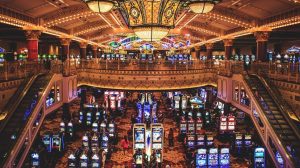 Friday night, I saw something I’d never encountered before: Ameristar Casino stopped all operations — poker, blackjack, roulette, craps, slot machines, everything. The reason was the tornado warning the weather service had issued for the entire St. Louis area.

Customers who stayed were herded down to the basement, where lockers and break rooms for staff members are located. I was pleasantly surprised at the cool efficiency of the dealers and floor personnel in moving hundreds of humans downstairs, and even more impressed there was no complaining from customers — including poker players, who can always find something to whine about. But that night, everyone remained orderly and just waited things out. I ran into a couple of friends, so passing the time was no problem.

Approximately a half-hour later, we were released and allowed upstairs. It took the poker room several minutes to get back up to speed, with dealers re-opening their tables and players returning to their seats. I sat down in the 20/40 mixed game, which has become my favorite on Friday nights, and before long the cards were in the air again.

Not long after the action resumed, one of the other players at my table checked his phone to see the latest on the storms and announced a tornado had hit the Amazon facility in Edwardsville. Another one touched down in Defiance, 20 miles west of us. We wouldn’t know the extent of the damage, including 7 deaths, until the next day.

Even as the warnings persisted, the poker games continued as usual. I occasionally checked the weather radar on my phone to see if the storms were passing over my house, where my wife was, and was glad to see they weren’t. Considering the damage to other parts of the Bi-State region, not to mention Kentucky, Tennessee, and Arkansas, I was relieved to spot not a single downed power line or tree branch on the streets and neighboring lawns when I got home late that night.