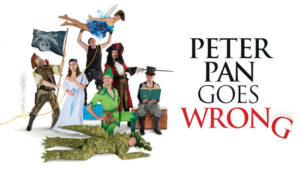 Yesterday, I mentioned getting a seven-day free trial of the BroadwayHD streaming service so I could watch the musical adaptation of Billy Crystal’s “Mr. Saturday Night.” Once that show was over, I looked around to see what other offerings would catch my eye.

My wife and I watched bits and pieces of various things before landing on “Peter Pan Goes Wrong,” by Mischief Theatre, the same group of people responsible for “The Play That Goes Wrong,” which we saw in New York in 2017. They also produced a limited TV series in 2020, “The Goes Wrong Show,” which was equally hysterical and clever (I reviewed it here).

The premise for all of Mischief’s work is that an amateur theatrical troupe, The Cornley Polytechnic Drama Society, tries to put on serious productions, but nothing ever goes as planned. Cast members forget lines, pieces of the scenery fail and fall at just the wrong times, stage crew appear when they shouldn’t, and so on. The TV series borrows from Ernie Kovacs by playing around with angles, ridiculously small sets, and outrageous physical comedy. Every element is perfectly timed and performed. Most importantly, none of the actors ever lets on that they’re in a comedy.

In 2016, both of the theatrical Goes Wrong shows were playing simultaneously in London’s West End, along with a third called “The Comedy About A Bank Robbery.” That one hasn’t made it to video yet, but I hope we’ll get a chance to see it someday, along with “Magic Goes Wrong,” which the ensemble collaborated on with Penn & Teller. That show, I’ve heard, consisted of actual stage magic combined with the usual Mischief mischief, but its run was shortened to just a couple of months in early 2020 because of COVID. I see on the Mischief Theatre website that they have a new show about mentalism, “Mind Mangler,” which will begin a UK tour next month.

Frankly, I’ll take any of them, on video or in person.

I was going to embed a clip from “Peter Pan Goes Wrong,” but I don’t want to give away a single comic premise or its brilliant execution. Instead, I’ll urge you to take a free week-long trial of BroadwayHD via this link to watch it. Then, buy the first season (six episodes) of “The Goes Wrong Show” for ten bucks on Amazon Prime (as I write this, they’ve marked it down to seven dollars at this link).

I think you’ll thank me later — unless something goes wrong.