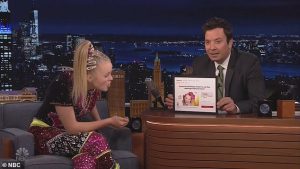 The other night, I happened upon some 18-year-old YouTube celebrity on Jimmy Fallon’s show. I have no idea who she is, or even what her name is, because I’m not in her target demographic. I have nothing against her, but I was surprised to hear Fallon say that 75,000 Americans have signed a petition to have Ronald Reagan National Airport in Washington, DC, renamed for her.

Now, I was never a Reagan fan and, even when I lived there, never referred to the airport with his name. To this day when I go to that city to visit my brother, it’s either “DCA” or merely “National.” Moreover, I’ve said for decades that we should stop naming things — airports, buildings, bridges, schools, etc — after politicians. Let’s use those opportunities to honor people who have really made a contribution to their communities over a long period, such as teachers, nurses, firefighters, and anyone who makes a really good pizza.

But certainly not for politicians or anyone in show business, which I guess includes social media influencers, regardless of the platform or the size of their fan base. And yet tens of thousands of Americans thought it was a good enough idea that they went to a website and added their names to the petition.

The whole thing reminds me of last week’s recall election in California, which was instigated by something like 1.5 million signatures on petitions to remove Gavin Newsom from his gubernatorial post. That seems like a lot of people, until you realize the state has nearly 40 million residents, so it’s less than 4%.

Yet Republicans — who hold no other power in The Golden State — were able to convince enough of their lemmings to sign their names on a clipboard full of paper, likely without understanding the implications of their actions. After all, no one really reads those things. We either wave our hand and walk away or just sign it to get the annoying person outside the supermarket to leave us alone. It actually takes less effort to do that than to find the online petition to rename an airport after an 18-year-old and click a few times.

The difference is that the latter has no real world implications, while the failed recall election ended up costing California some 300 million dollars that could have otherwise been spent on fighting wildfires, reinforcing the electrical grid to prevent brownouts, or changing the law so the petition threshold is high enough to dissuade such idiocy in the future.