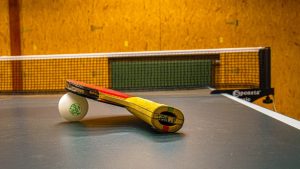 My wife and I have been cleaning out a lot of stuff from our basement recently, and one of the items that had to go was our ping-pong table.

It was a tough decision because I loved playing, as did my daughter. But she hasn’t lived with us for many years, and my wife’s interests in the game waned long before that. Since we haven’t had people visiting during the pandemic, the table just sat there collecting dust. I think the last time we played was about five years ago, when I moved too quickly to return a ball way off the table and felt my old tennis injuries act up in my knees and achilles tendon.

On top of that, we had a mold problem downstairs after several heavy rains flooded the basement multiple times, destroying furniture and carpeting, as well as doing damage we couldn’t see behind walls, moulding, etc. We finally installed a sump pump which helped avoid a repeat of those disasters, but my attitude was that everything down there had to go.

The table we just got rid of was the second one in my life. The first was when my parents bought a house that we moved into the summer before I started high school. It had a huge basement with very high ceilings, with a perfect place to put a ping-pong table without interfering with the washer and dryer. When they bought one and brought it home, my brother and I were ecstatic.

We played a lot, and I grew to like the game so much that when no one else wanted to play, I’d prop up one half of the table so I could practice by myself. I was never what anyone would consider more than a medium-level player, but I still had a lot of fun.

We didn’t have that much room in our current basement, which has low ceilings and a much narrower space, complete with a support pillar in the middle of the room. Still, there were a lot of hours spent playing down there.

Now, that table is gone, along with a Nok Hockey board, a couple of old baseball gloves, my daughter’s shin guards from her one year playing soccer, some juggling clubs, and other nonsense that had been laying around unused for too long. Yet another example of time marching on, I suppose.