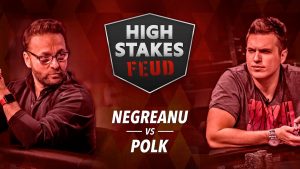 There is a high stakes poker match going on this month between two of the bigger names in the game, Daniel Negreanu and Doug Polk. I stopped paying attention to poker news many years ago, so I’m not sure why they were feuding or what the challenge is, but there’s a lot of money and ego on the line.

I have a few friends who are watching it unfold and have alerted me via text when a new session is starting. Actually, what they’re watching is live commentary by other poker professionals on YouTube as Negreanu and Polk play online.

There are several of those streams, and I’ve tried to watch, but I can’t keep up with the action, especially when the poker pundits are not talking about what’s going on in the hands. Even when they’re not going off on tangents, the pros are all very excited and thus way too hyper and fast for my old-fashioned brain. Plus, their level of poker knowledge is much higher than mine, to the point I don’t even recognize the concepts they’re discussing. I know both of the games Negreanu and Polk are playing — Texas Hold’em and Pot Limit Omaha — but it’s been so long since I was dealt any cards that I’m too rusty to make much sense of what I’m sure is brilliant analysis.

Moreover, I can’t follow two hands at once (which is the format of the match), and because the pace of online poker is so much faster than live games, I can’t keep track of what’s going on. I did play some online poker more than a decade ago, and once even tried multi-tabling, but I couldn’t get that gear going in my head, particularly with a countdown clock that forced decisions within 15 seconds.

I know this litany of complaints makes me sound like an Old Man, which I certainly am compared to the majority of people who populate online poker games, and that’s fine. As I wrote earlier this year, I’ve lost interest in the game at almost every level and have no desire to sit down and play.

I guess that extends to watching other people play, as well.