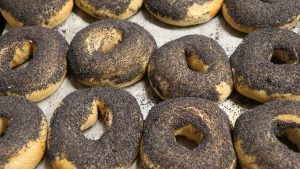 While eating a poppy bagel yesterday morning, a question occurred to me for the first time: “Why are the seeds on the outside?”

When I get a rye bagel, there aren’t caraway seeds stuck to the crust, they’re inside, in the dough. Same when I buy a lemon-poppy muffin. But for some reason, poppy (and sesame) bagels are covered with far too many seeds. In fact, there was so much poppy on the one I ate, seven people in the vicinity failed their drug tests at work.

It seems whoever invented this variety of bagel thought, “Sure, we can make a delicious product, but let’s make it so hundreds of seeds will fall off with every bite, thus ensuring our customers enjoy our food with both their mouths and feet!”

But that wasn’t the end of it.

Second guy in kitchen: “What if we made a bagel with multiple seeds, plus bits of garlic and onion?”

First guy: “What, you wanna put all of that in the batter?”

Second guy: “No, on the outside, so gravity has more little bits to play with.”

First guy: “What if the customer eats over a plate on a table?”

Second guy: “Wouldn’t matter. These seeds are impossible to contain once they fall off the crust and go airborne. You could eat them over a drop cloth and still need to bring out a vacuum to clean up afterwards.”

First guy: “What if we didn’t put the seeds on the outside, but in the cream cheese, instead? We do it with chives and walnuts and lox and other ingredients. What about poppy-flavored cream cheese?”

Second guy: “If we do it your way, we don’t annoy the lactose-intolerant. My way, everybody’s picking seeds out of their belly buttons for days!”