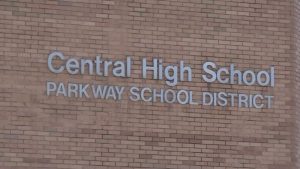 Racist graffiti was found in the boys bathroom at Parkway Central High School (which my daughter attended) in the St. Louis suburbs. In response, the administrators said all the expected things and sent notes home to parents, while a thousand of the school’s staff and students walked out in protest and solidarity. Sadly, those actions will accomplish nothing until someone squeals and turns in the perpetrator(s), who is/are then expelled from the school. Zero tolerance for that garbage.

If you’re into COVID schadenfreude, this is the website for you.

Before any media outlet reports on another lawsuit filed by Trump against anyone, they should remind us how many times his legal actions have been successful: zero. That’s also the number of his followers whose minds will be changed by the Arizona GOP’s report on the election “audit,” which not only confirmed Biden won, but showed he had more votes than originally thought, while Trump had fewer.

As a sidebar, major media outlets should publish a list of the incompetent lawyers Trump hires. Think of it as sort of a reverse-reference, like a Yelp warning about attorneys who don’t know what the hell they’re doing.

I’m happy to hear “The Amazing Race” is currently shooting its 33rd season, with plans to keep going for several more years. I assume it will debut this winter. Can’t wait to set the DVR for it.

Worth a read: Rick Ellis explains The Cowardice Of Conservative Talk Radio.