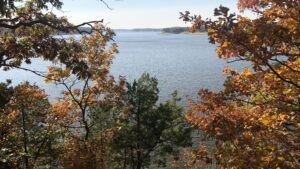 While New England is renowned for its annual display of colorful arboreal splendor, it’s not so bad in our neck of the woods, either, as the past week proves. If we’re voting, I’ll cast my ballot for leaves from deciduous trees over needles from evergreens. Everyone wants to jump into a nice, big, crunchy pile of the former, but no one wants to leap into the latter.

My wife and I were thinking about going to New York before the end of the year to see a couple of plays. I looked at the listings and was discouraged to find the only one that peaked my curiosity is Gabriel Byrne’s one-man show about his life. But a single ticket costs $248 — from the box office, not scalpers — and that’s before Telecharge’s fees! Looks like we’ll be staying home in December.

While watching the Chiefs-Niners game yeserday, I was nauseated every time Fox ran a promo for its election coverage with the title “Democracy 2022.” They should use the full title, “We’re A Big Part Of The Reason There Won’t Be A Democracy After 2022!” Of course, I don’t expect them to change it, since the truth is banned in their building.

Speaking of the NFL on Fox, I wince every time Terry Bradshaw mispronounces a player’s name while doing the highlights. It’s made worse by his colleagues at the desk laughing. True, some names can be a challenge, and this isn’t as big a problem as when John Travolta called Idina Menzel “Adele Dazeem” at the Oscars. But it shouldn’t be hard for a production assistant to type out a pronouncer on the cards Bradshaw reads from. Or even go over the player names with him a few minutes before airtime. After all, he’s just sitting around waiting for halftime.