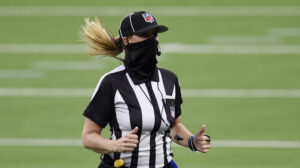 Whenever I see Sarah Thomas, the NFL referee with the blonde ponytail, I think it’s Kim Wexler from “Better Call Saul.” I miss that show.

Pope Francis tweeted yesterday: “Women must be entrusted with greater positions and responsibilities. Many calamitous decisions might have been avoided, had a woman been directly involved in decision-making! We are committed to ensuring women are increasingly respected, acknowledged and involved!” He forgot to add: “But whatever you do, don’t let them into the priesthood.”

If you’re recommending a streaming TV show to me, never say, “The first seven episodes suck, but it really gets going after that.”

I can’t recall a protest less effective than expecting oil companies or consumers to change even one of their policies because you threw soup onto a painting in a museum.

I have never understood voters who, with less than two weeks before election day, are undecided who they’ll cast a ballot for. I’m not talking about for judges or municipal offices, but for the big ones like president, senator, congressperson, and governor. They must be the same ones who, when asked what they want for dinner, always answer, “Oh, I don’t know.”

The ratings for “The Real Love Boat” were so bad on CBS that it’s been cancelled, and the remaining episodes have been tossed onto the Paramount+ streaming platform instead. Hopefully, that means “The Amazing Race” will be moved back to its rightful time slot, immediately after “Survivor,” reuniting the two best reality shows on television.