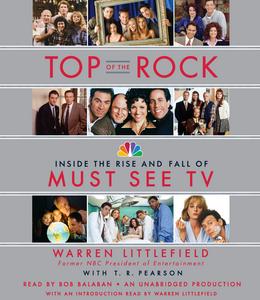 When I picked up Warren Littlefield’s “Top Of The Rock,” I thought it was going to be a memoir by the former NBC programming executive who steered the network through its Must See TV heyday. It turns out to be an oral history of those years with Littlefield’s memories interspersed with those of the actors, writers, directors, and business people who developed such hits as “Seinfeld,” “ER,” “Cheers,” “Friends,” “Mad About You,” “Law and Order,” “Will and Grace,” and “Frasier.”  There’s lots of insight, some good stories, and a little too-much back-patting, but along the way, you get to see the process and the people behind some of the best television of the ’80s and ’90s.

There are four threads running through the book that stand out: