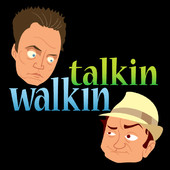 Kevin Pollak has had a varied career. He started as a standup comedian/impressionist, then moved into playing mostly dramatic roles in dozens of movies, hosted the first season of “Celebrity Poker Showdown” on Bravo, and a few years ago started an online-only interview show called “Kevin Pollak’s Chat Show,” in which he has one-on-one conversations with other celebrities. Those discussions often last over two hours, and he gets his guests to open up and tell stories from their lives that are often revealing and mesmerizing (I strongly recommend the John Landis episode, in which they discuss “Animal House,” “The Blues Brothers,” Michael Jackson’s “Thriller,” “Coming To America,” and more).

Last week, Pollak debuted a new podcast, “Talkin Walkin,” in which he becomes Christopher Walken. I’m using the word “becomes” because, while others do impressions of Walken in short bursts, Pollak spends the entire podcast improvising as Walken, imbuing every sentence with his quirky speech patterns. That’s much harder than it sounds. When an actor portrays a real-life person on stage or on film, they are speaking lines that were written and rehearsed to perfection. Pollak isn’t doing that. He has a conversation as Walken with a co-host who plays both straight man and provocateur, playing along but also asking questions that spark clever responses. After awhile, it’s easy to forget that you’re not listening to Walken himself, although I do laugh out loud each time Pollak wraps his impression around words that sound even funnier in the Walken cadence (e.g. cahoots, smegma).

I don’t know how often Pollak plans to do Talkin Walkin, or if the concept will get old quickly, or why he changed Walken to Walkin in the title, but it’s already one of the top comedy podcasts on iTunes. You can find it here.