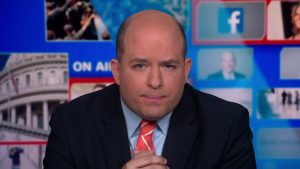 I always found Brian’s reporting and writing to be top-notch, combined with a strong work ethic that made him willing to jump on the air at any time, day or night, to discuss a media-related story — and even those only tangentially connected to the media.

With Brian as anchor, “Reliable Sources” won its time slot in the key 25-54 demographic week after week and he had recently signed a new, multi-year contract. I suspect his release has to do with the network’s new owners (Warner/Discovery), who likely disapproved of Stelter’s unflinching coverage of them over the last year. Corporate CEOs hate hearing their names in news reports and being held accountable, even when they are completely factual. I’m also guessing that his new bosses lean to the right politically, and therefore disliked Stelter’s bestselling book, “Hoax: Donald Trump, Fox News and the Dangerous Distortion of Truth.”

In addition to his Sunday show and other duties at CNN, Brian also compiled a daily “Reliable Sources” newsletter in which he aggregated a slew of media stories and commented on many of them. I considered it a must-read. I understand CNN intends to continue the email version, possibly under the direction of Stelter’s colleague, Oliver Darcy, who I hope can keep its quality level close to the high standard Brian set.

I’ve followed Brian’s work ever since he began TV Newser, a blog about cable and broadcast news, while still attending Towson University. As soon as he graduated, he was hired by The New York Times, where he learned a whole new skill set from his coworker, the legendary media columnist David Carr. Brian left that gig to take over “Reliable Sources” nine years ago.

He hasn’t announced what he’ll do next — the firing no doubt came as a surprise and he’ll likely have several offers to mull over — but I look forward to whatever challenge he takes on next, because he’s too good to be on the sidelines for long (I’ll subscribe to your Substack, Brian!).