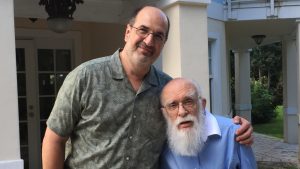 I don’t have a lot of people I call heroes, but James “The Amazing” Randi certainly qualified. He died Tuesday at 92 of, well, being 92.

The first time I saw Randi was when I was a kid, watching Sonny Fox introduce him on “Wonderama,” a weekend morning children’s show that ran in New York. Randi was already a world-famous magician who could do close-up magic, big stage illusions, and Houdini-like escapes. I was fascinated.

Later, I watched as he segued into another phase of his career, exposing frauds and charlatans in his seminal book “Flim-Flam!” and when his friend Johnny Carson allowed him airtime to reveal the secrets of the psychic surgeons of the Philippines, or the not-at-all supernatural methods of the Israeli spoon-bender Uri Geller, or the way preacher and phony faith-healer Peter Popoff received the information he claimed came from god (but was in fact transmitted by his wife to a hidden receiver in his ear). At every turn, I cheered on Randi as a voice of reason.

It was because of Randi that I became aware of CSICOP, the Committee for Scientific Investigation of Claims Of the Paranormal (now known as the Center For Inquiry). Knowing that he was one of its founders, I became a supporter. I even heard him hosting a late-night show on WOR Radio in New York, where he promoted the scientific method and rational thinking during fascinating conversations with guests and callers.

For years, Randi had carried a $1,000 check in his pocket, which he promised to make out to anyone who could prove they had paranormal abilities. He never had to pay anyone, even after he raised the amount to $10,000. In the mid-1980s, Randi announced that he wanted to increase the prize again, this time to $100,000, but he didn’t have the finances to back the guarantee. So, he asked several of us if we would provide written pledges for a portion of the total. When I told Martha that I wanted to back him for $10,000, she said, “Can we afford that? Couldn’t we just make it $5,000?” I assured her that we didn’t have to send any cash to Randi yet, and there was zero risk — no one would ever be able to follow through on any pseudoscientific claim. She agreed, I sent him the pledge and, though quite a few people tried, no one ever earned the prize. By the way, one of the others who made a pledge — more substantial than mine — was Johnny Carson.

A few years later, I had Penn Jillette in the studio during my WCXR/Washington morning show. As always, Penn was a great guest, and mentioned that after we got off the air, he was going to the University of Maryland, where the National Capital Area Skeptics were hosting a lecture by Randi, who Penn credited for the early success he and Teller had achieved. Like me, Penn thought of Randi as someone very special. We talked about Randi at length, and when I mentioned that we had corresponded but never met, Penn invited me to join him at the event later that morning. I agreed immediately.

The auditorium was overflowing with people as I worked my way down to an open seat. After Penn did some juggling and fire-eating, he introduced Randi, who began his lecture by swallowing a whole bottle of homeopathic sleeping pills, knowing they would have no effect. He then spoke for more than an hour on a variety of subjects. Afterwards, I went backstage to say hello to Penn, and he took me over to where Randi was sitting, introducing me as “one of the smartest radio people I know.” Randi replied with a laugh, “Well, that’s not saying much!” We spent a half-hour or so talking, but before we parted, I got Randi to agree to do my show the next morning, where he told stories about his adventures, his relationship with Carson, and his battles against charlatans who claimed paranormal abilities.

That was the first of many times I shared the airwaves with Randi. He was always a terrific guest, because he was such a brilliant thinker and good talker, and because he knew how to do radio. Over the years, we talked about his career, his guest appearance on “Happy Days,” his work fooling the parapsychology researchers at Washington University, his longtime crusades against Uri Geller and Sylvia Browne, and his exposure of bogus bomb detectors during the Iraq War. You can listen to many of those conversations here.

One of his appearances I remember well came in February, 2005, after ABC gave an hour of primetime to a report about “John Of God.” That show’s lack of skepticism about this faith-healing charlatan so incensed me that I called Randi at home as soon as it was over. He was steaming, because he had been brought in by ABC to “balance” the nonsense viewers had seen — but they gave Randi so little airtime it was laughable. So I decided to give Randi some equal time on the public airwaves via my radio show. It was one of the rare times I could hear anger in his voice.

By then, he had founded the James Randi Educational Foundation, a non-profit that promoted his work (also with support from Carson’s foundation). He was still offering his paranormal challenge, but the prize had been upped to a million dollars — backed by the largesse of another benefactor whose money was in a bank account, not only as a guarantee of its existence, but also to earn a little bit of interest that Randi could withdraw to cover his expenses as he traveled the world for his lectures.

The JREF put on an annual event called The Amazing Meeting. I didn’t attend the first one in Florida, but made it to ten of the next twelve in Las Vegas. The rosters of speakers and performers from the worlds of science, show business, and related fields were remarkable. Although there were only a couple of hundred attendees at the beginning, the number kept growing, to the point there were 1,600 registrants — so many that they filled the largest ballroom at whichever hotel served as the venue that year. I remember standing towards the front and looking towards the back with tears in my eyes as I witnessed the incredible growth of the skeptic movement, with many in the crowd reveling for the first time in the knowledge that there were other people like them. For those who came from parts of the US (and the world) where critical thinking had not been part of their upbringings, The Amazing Meeting was more than just entertainment and information. It was validation.

On the final night of the final TAM in the summer of 2015, there was a party to honor Randi, with some of his friends and colleagues taking the stage to say a few words about him. I was delighted to be asked to speak, and spent several minutes looking right at him as I tried to express how much he’d meant to me. Afterwards, we shared a big hug.

A few months later, Martha and I decided to spend Thanksgiving in south Florida, our first time celebrating that holiday without any family members. I called Randi and told him we’d be not far from his home in Fort Lauderdale and would be honored if he’d join us for lunch the next day. He agreed, so we drove over, picked him up, went out for a meal, then returned to his home, where we sat and talked for another hour or two.

Afterwards, Martha got a picture of me hugging Randi (that’s the photo above) as I again thanked him for a lifetime of inspiration, dedication, and a few pretty cool magic tricks. As we drove away, Martha noticed that I was very quiet. She knew what I was thinking — that was going to be the last time I ever saw Randi.

We spoke by phone only a couple more times over the last five years. I could sense his growing fragility, and the conversations were shorter than ever. But he still had some of that old Randi sparkle as we shared our frustrations over a world that seemed to be diminishing in its acceptance of reality and reason. We lamented the growth of conspiracy theories, bogus mediums getting their own TV shows, and the growth of not only more pseudoscience, but anti-science.

I’m thinking about all of that today as a wave of memories of Randi fills my mind — thankful for the lessons he imparted, the friendship he offered, and all the laughs along the way.