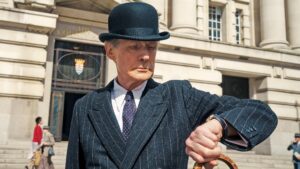 I don’t think I’ve ever seen a movie with upper lips as stiff as they are in “Living.”

The always-wonderful Bill Nighy stars as Mr. Williams, a civil servant who oversees the public works department in London’s city hall in the 1950s. He’s absolutely humorless, a solitary figure who doesn’t even deign to ride in the same train car as his employees, who act as crustily as he does.

There are two exceptions. One is Ms. Harris, a young woman desperate to leave this boring branch of bureaucracy behind so she can take a job elsewhere and be around people with a bit more humanity.

The other is Mr. Wakeling, a just-out-of-school arrival not attuned to the steely tenor of the staff he’s been hired to join. His officemates are the kind of bureaucrats who fill out forms and push paper around but never actually accomplish anything on behalf of the citizenry. When a group of ladies comes in to get permission to turn a lot full of rubble into a playground for neighborhood kids, Wakeling is assigned to walk them around to all the other departments, which are similarly filled with uncaring functionaries, masters of red tape, who tell them it’s not their responsibility. After they’ve made the rounds and returned to Mr. Williams’ domain, he files their paperwork in a bin on his desk, where it will be quickly forgotten.

Life takes a turn when Mr. Williams is given a grim diagnosis by his physician. That somehow flicks a switch in Williams’ brain and he decides to begin living a fuller life. If only he knew how. Friendless and with no hobbies, he has nowhere to turn until he happens to cross paths with Ms. Harris. Despite the decades of age difference, she agrees to accompany him on a couple of outings, strictly on a platonic basis. Those experiences — and his absence from the office — add a bit more spring into Williams’ step.

Nighy is perfect in the lead role. He has an uncanny ability to say more with a raised eyebrow or sideways glance than almost any actor alive. To watch him in “Living” is to witness a master class in acting. He plays Williams with extreme restraint, yet with a physical bearing that’s as imposing as his attitude towards his underlings. And Nighy wears a bowler hat better than anyone since the subject in the renowned René Magritte painting.

However, not a lot takes place in “Living.” It works at about the same glacial pace as the mundane office workers, and there are exactly zero action sequences. If that’s what you’re looking for, and all you know about Nighy is his role as the addled pop star has-been in “Love Actually,” I’d steer you towards some of his other movies, like “Wild Target” (with Emily Blunt), “About Time” (with Domhnall Gleeson and Rachel McAdams), and “The Best Exotic Marigold Hotel” (with a slew of other British legends).

As for “Living,” despite the joy of watching Nighy, it was still a bit too slow for me, so I can only give it a 6 out of 10. Opens today in theaters.