Review: “The Banshees Of Inisherin” 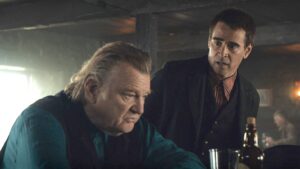 I’m not sure whether “The Banshees Of Inisherin” is a very dark comedy with tragic overtones or a tragedy with light comic undertones.

Either way, it’s another unusual story from Martin McDonagh, the writer/director behind the Broadway hit, “Hangmen” (which I raved about earlier this year), as well as the movies “Three Billboards Outside Ebbing, Missouri” and “In Bruges.” The stars of the latter, Brendan Gleeson and Colin Farrell, play the leads in this new one.

It takes place on Inisherin, a small island off the coast of Ireland where nothing much happens. Every day at 2pm, Pádraic (Farrell) goes to get his longtime friend Colm (Gleeson), and the two walk up to the town pub for a pint. Or at least that was the custom. But as the movie opens, Colm doesn’t answer the door when Pádraic knocks, nor even looks out the window when he raps on the glass. Something’s caused their friendship to fracture, but Pádraic has no idea what it is.

It turns out that Colm has simply decided that Pádraic is dull, and he doesn’t want to spend another moment with him. He’d rather spend time composing music on his violin and finding stimulating conversation elsewhere. Pádraic doesn’t take the news well and tries to convince his pal otherwise, but Colm isn’t interested. All of this takes place in front of other locals, including at the pub, where they finally have something new to gossip about.

As the feud escalates between the two men, Pádraic’s sister, Siobhan (Kerry Condon), tries to heal the rift, but Colm refuses her entreaties. Siobhan lives with and loves her brother but clearly wants to escape the town and have her own life somewhere else rather than share a small house with him and the tiny donkey which often wanders into their living space.

“The Banshees Of Inisherin” takes place in the early 1920s, when Ireland was caught up in a civil war, which the characters can hear across the water from the mainland. It was an era before television, radio, and other technology provided something to do besides sit around and mope. There wasn’t even electricity on the island, so its residents gathered at the pub, the only place to spend time with other humans outside their own four walls.

At its core, ”The Banshees Of Inisherin” is about loneliness, which can be a powerful depressive, and how it can still be a better alternative then being bored to death by the same people day after day. It’s not a feel-good movie by any means, but it is another example of McDonagh’s expert ability to pull us into small stories in small places populated by oddballs. His lyrical writing — interspersed with countless uses of “feckin” and “shite” — reveals much about masculinity, patience, and platonic relationships. There’s also a testy discussion about whether the virtue of niceness is overrated.

Farrell really shines as Pádraic, somehow turning his rugged good looks into the face of a man scared of having no one to share life with. Gleeson is his usual magnificent self, imbuing Colm with an exhausted determination as he feels parts of his very being drained by every moment he spends with Pádraic.

Condon, meanwhile, is a revelation as Siobhan, a fiercely independent woman who reminds me of Caitríona Balfe in last year’s “Belfast” (which I reviewed here). She personifies the kind of loneliness the men around her can’t even recognize, and is the character who earned my sympathy the most (second place: Jenny The Donkey).

You’re not going to walk out of “The Banshees Of Inisherin” with a smile on your face — until you think about the uniqueness of what you’ve just seen and how McDonagh sucked you into his sad story. Last week, in my review of the Julia Roberts/George Clooney romcom, “Ticket To Paradise,” I said that sometimes it’s enough to sit back and watch two movie stars do their thing. Farrell and Gleeson accomplished that for me, albeit in a very different milieu and at a different degree of stardom.

I’m giving “The Banshees Of Inisherin” a 7.5 out of 10. Opens tomorrow in theaters.