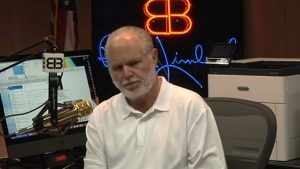 Throughout my four-decade radio career, I almost always made it a habit, on my way to work, to listen to whoever preceded me. One of the biggest exceptions was Rush Limbaugh, who show aired right before mine on KMOX. I not only detested what he said and stood for, but also for the way the talk radio industry bent over backwards to recruit other hosts who emulated his style and agenda. Hearing his vitriolic bullshit turned my stomach so much I couldn’t stand it.

Many in the industry rebuffed criticism of Limbaugh by writing him off as merely “an entertainer” or “a provocateur.” He was not. He was a pill-popping, purposely-divisive, climate-change-denying, coronavirus-disinformation-spreading, egomaniacal bigot whose twisted brand of conservatism became the boilerplate for right-wingers at every level. And it wasn’t an act, it was a full reflection of who he was.

Personally, I can’t imagine waking up every day angry, full of hate, and thinking about who you can punch down at (AIDS patients, school shooting victims, the homeless, etc.). Limbaugh — as elite as they come, with an annual income in the tens of millions, a mansion in Florida, and a private plane — resorted to the same old litany of attacks upon liberals or feminists or immigrants or Black Lives Matter protestors or whoever he wanted his old, white, aggrieved listeners to be afraid of. Because fear is the number one driving force in the loudmouth business.

I also couldn’t fathom spewing bald-faced lies every day. Limbaugh had no such compunction. In 2018, I wrote a piece about The Business Of Lies, in which I said:

When the liar is a person of authority — a politician, a TV news anchor, a radio talk show host, a priest — you don’t begin with the presumption that you’re about to be handed a load of crap. Having consumed their content before, some of which may have been truthful, you tend to believe everything else they present, which is why it’s so easy for them to pass off bogus information as facts. Thus, if you’re a stalwart Alex Jones fan, you’d likely buy his claims that little kids who were killed in the school shooting at Newtown were merely actors. Or if you’re a regular Reddit reader, you might have fallen for the horrible Pizzagate assertions that Hillary Clinton and other Democrats were running a pedophile ring out of the basement of a pizza place in Washington, DC. Or anything Rush Limbaugh has said about feminists and liberals over the last thirty years. Or perhaps you’d fall for the repeated lies of our nation’s current Top Con Artist, Donald Trump, who spent years claiming that Barack Obama was not born in the United States of America.

I’d bet that none of these people ever suffered that sick feeling in the pits of their stomachs that I still have when I get something wrong. To the contrary, when a journalist or historian or regular person rebuts their claims, they don’t thank them for the correction and inform their audience, they double down on the nonsense and denounce the fact-checkers as “fake news.”

The talk radio industry yielded the beachhead of truth to its vast cabal of loudmouths long ago. Television news, too, has permitted itself to be corrupted by too much shame-free garbage. As technology advanced, Apple, YouTube, Facebook, and Twitter became the latest to allow their distribution channels to be manipulated by content providers with neither scruples nor consequences for their lies.

The breadth of falsehoods sticks in my craw so much that I revised the topic last summer in a piece titled The Culture Of Lying, in which I said:

As I’ve thought about the culture of lying, I’ve wondered how it’s imprinting on our youngest generations, the kids who have grown up hearing babbling broadcasters and powerful politicians fomenting fear and rage with their fabrications. Are they telling more lies to their parents and teachers? Do those authority figures give the children passes because “everyone does it”? What if one of the adults in the house is an egregious offender — does Melania let Barron get away with it?

When it comes to those broadcast and cable outlets and website (InfoWars and its ilk), whose businesses are built on mountains of falsehoods, where excuses are given daily to a chief executive who’s been caught in lie after lie, are employees allowed to get away with deceiving each other and their bosses more easily?

Does that trickle down to other for-profit concerns? Does it make it okay for the Houston Astros or New England Patriots to cheat their ways to victory? Is it acceptable for a lawn maintenance company to charge a homeowner for mowing the grass even when it obviously hadn’t?

Limbaugh set a low standard for the truth, which Fox News and other outlets I mentioned above have not only exploited, but pushed even further down. Like him, they bear a great deal of responsibility for the extremism on the right, which we saw come to a head during the violent insurrection at The Capitol on January 6th. Watching the horror of that day, I tweeted:

If you are the General Manager or Program Director of any radio station that airs Rush Limbaugh, Sean Hannity, or the like, you are complicit in what happened at the Capitol because of the disinformation you’ve allowed to be spread through your transmitter for years.

What you didn’t see reported is that Limbaugh’s popularity had dropped off considerably in the last decade, as audiences went elsewhere in the right-wing bubble for even more outrageous content devoid of morality. As a freelancer who filled in on lots of talk radio frequencies across the country, I witnessed from the inside the insidiousness of that deterioration, as programmers erred by pushing aside the kind of general interest talk hosts who had attracted a vast listenership across wide demographics. Instead, they opted for more and more right-wing political garbage that plays to the base (and its basest instincts).

The result is that ratings and advertising revenue for most of those stations are substantially lower than they were 15-20 years ago. In many markets, as his ratings tanked, Limbaugh’s show lost its perch on the dominant signals, kept on the air only because iHeartMedia — which syndicated his show — stuck it on a much-less-listened-to outlet, so they could lie to advertisers about his reach.

After Limbaugh’s death was announced yesterday, I saw some of his faithful fans attacking people who expressed happiness that he was gone — despite the fact that Limbaugh himself had trafficked in exactly that kind of grave-dancing repeatedly when the life of anyone he disagreed with ended. He was not a widely-beloved persona in the mold of Alex Trebek or Cicely Tyson, about whom no one could have anything bad to say.

To the contrary, Limbaugh deserved the same kind of death exaltations as Jerry Falwell, Jesse Helms, Roger Ailes, and others who weakened the American fabric through the force of their hatred.

By the way, to all those who offered prayers to Limbaugh during his bout with terminal lung cancer, how’d that work out?