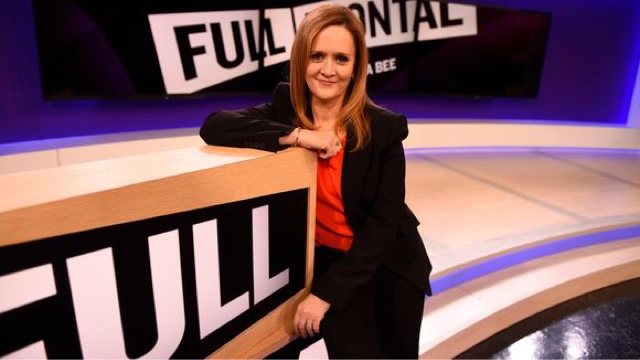 Remember when I wrote that “The Daily Show” had lost its edge with Trevor Noah in the anchor chair? The mantle of brilliant topical comedy had passed instead from Jon Stewart to John Oliver on his HBO “Last Week Tonight” show, and now Samantha Bee has picked it up and run with it on her TBS “Full Frontal” show, which debuted last night.

Her take on the presidential campaign was sharp and biting, with the kind of attitude distinctly missing from Noah’s approach. Sure, she’s had months to prepare for her premiere, but much of what came out of her mouth Monday night was clearly written in the last 72 hours — and it worked.

Every other review of “Full Frontal” will mention that Bee is currently the only woman hosting a late-night comedy show (does 9:30pm in the Central Time Zone count as late night?), but what really differentiates her is that she has something to say and isn’t going to hold back. That’s where being on TBS will help her — that network won’t expect Fallon-like ratings, so Bee can exploit her niche with an edge and no need to worry about pleasing everyone while offending no one.

Who’d have thought that two weekly shows (“Full Frontal” and “Last Week Tonight”) could do this better than one that does it four nights a week? Bee’s impressive opener leaves the lame material that makes up Weekend Update on “SNL” in the dust, too.

After just one show, Bee’s “Full Frontal” is already must-see TV in my house. Too bad we have to wait another week to see what and who she’ll skewer next.