Saturday At The Symphony 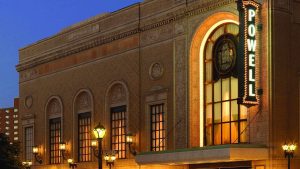 My wife and I were very happy to be back in Powell Symphony Hall on Saturday night. It was our first chance since before COVID to see and hear the St. Louis Symphony Orchestra in person.

It’s always a thrilling experience, but it’s not often I leap to my feet at the end and exclaim, “Wow!” I did just that as the orchestra completed Tchaikovsky’s Fourth Symphony, a piece with powerful brass portions. So much so that the stage was configured to have at least ten feet of open space between the trumpets/trombones/tuba and the cello/bass players, whose ears would still be ringing if they’d sat adjacent. I also got a kick from the extended moments of pizzicato strings. At its conclusion, the rest of the audience joined me in giving the Symphony a well-deserved standing ovation, which lasted nearly five minutes.

One of the aspects I most enjoy about seeing an orchestra live is the ability to focus attention on various sections as they play. For a while during the Tchaikovsky piece, I watched the percussionists and felt sorry for the woman playing the triangle. First, there was no way her instrument could be heard above the rest. But worse, she’d been placed right next to the guy with the cymbals, so that every time she went “ting!” he went “crash!” Even when she did that move striking the inside edges of the triangle (technically known as a “ting-a-ling”), she could have been pantomiming her part, for all I know.

The first half of the concert was filled with two modern pieces. I tend to slump a bit when the program lists anything composed in this century, because it usually can’t compare favorably to the masters. But the new pieces, by Jessie Montgomery (“Banner”) and Anna Clyne (“Dance”), were quite good, with the latter featuring a cello soloist and five dancers. “Banner” was commissioned to celebrate the 200th birthday of “The Star-Spangled Banner,” which — according to the program — Montgomery felt never applied to her as a Black person living in the United States.

As a white US citizen, I have never felt any connection to the song, written during The War Of 1812. It’s long past time for us to have a new anthem, though it wouldn’t be easy to get a divided nation to agree on a one (see Albert Brooks’ brilliant take on such an attempt).

However, I do remember the one time I was moved upon hearing “The Star-Spangled Banner.” It was mere weeks after the 9/11 attacks. Martha and I were at Powell to see the Symphony, which, unannounced, opened the evening with the anthem. We all stood, including the orchestra (except for the cellists, whose instruments would be a pain to hold aloft), as the room got oddly emotional, followed by a loud, collective sigh.

I didn’t have that same feeling Saturday as conductor Stéphane Denève led the musicians through the anthem as the evening’s thematic opener, but I was happy to be back in that building listening to this brilliant group of artists again — including Ms. Triangle.