Scene From An Italian Restaurant 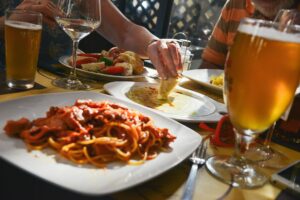 Saturday night, my wife and I went to dinner with another couple we always enjoy spending time with. They chose an Italian restaurant none of us had been to for more than a decade, at least.

Once we were seated, a waiter came over, introduced himself and said he’d be right back with water and bread and to tell us the specials. For the next ten minutes, we saw him serving and waiting on other tables but all we got was water from the busperson. Then I was startled by a hand on my shoulder. I looked up to see not the waiter, but a middle-aged man, who started talking to us. I was sure I didn’t know him, but wondered if he was affiliated with the restaurant. That question was resolved when he mentioned something about zucchini and soup and a couple of other dishes, and as he went on and on he kept interjecting “but we’ll make whatever you want.”

Satisfied he’d said enough, he turned and walked away. We learned later he was the owner, but he really should have introduced himself, because for a while there I thought some stranger had glommed onto our foursome. This was not even close to the most unusual thing that occurred that evening.

The server finally returned and told us the specials, one of which was Chilean sea bass. I can’t tell you how many restaurants I’ve been to where this was one of the featured items not on the menu. I always think, “Do they need to say sea before bass?” Isn’t that implied when it’s a fish, that it came from a body of water? No one ever says sea tuna or river salmon or ocean tilapia. Would there be confusion if it was simply referred to as Chilean bass? “Wait, is that Chilean sea bass?” “No, it’s actually land bass, a very rare species.”

Anyway, we ordered food and drinks — and I reminded the waiter he’d promised us some bread — then went back to our conversation. A minute later, he returned with a plate of olive oil, parmesan, and balsamic vinegar for us to dip the bread into. I passed the bread plate around and everyone took a slice, leaving one left over. This is yet another pet peeve of mine. How hard is it to make the amount of bread or rolls equal to (or a multiple of) the number of guests at the table? There’s no reason to add an extra one, which becomes the starchy equivalent of the remainder in a long division problem.

After we all had our salads, the server rolled out a cart with two burners on top, which he lit and then used to heat up our entrees, dishing the items out of serving platters onto plates he set directly on the burners.

This is another thing I don’t understand. If the food was hot in the kitchen, it wouldn’t have cooled off substantially if you’d just brought it directly to us as soon as it was ready. Or was our meal sitting so long on a counter in the kitchen that it got cold and now has to be warmed up? Or is this all just restaurant theater so you can tell us, “Be careful, the plate is hot,” as if we didn’t just see you put it in an open flame?

Regardless, when he took the dishes out of the fire and sat them down in front of us, none of the food was hot enough. The wives got his attention and had him heat theirs up some more, but the other husband and I kept our mouths shut because we were so hungry at this point it didn’t matter our entrees were no better than room temperature.

The waiter was apologetic and began to explain the problem, but stopped himself, saying, “It doesn’t matter, there’s no excuse.” Correct! But perhaps the reason our food came out of the kitchen cold in the first place was because this waiter loved to talk — to everyone, quite quickly and for too long. The guy had the metabolism of a hummingbird, and apparently thought we were there to chat with him instead of each other.

At one point, and I swear I’m not making this up, he interrupted us to launch into a story about having just sold his condo and bought a house. Oh, and while he had our attention, he felt it was a good time to show us a picture of his dog in a cute outfit. Who does that while four people he doesn’t know are sitting around the table trying to have their own conversation, none of which is about real estate or pets?

We eventually finished our meals, paid the check, and got out of there, but that’s not the end of the story. The next day, my wife’s stomach started acting up and we’re pretty sure the culprit was food poisoning from the night before — and I doubt it was because she was the one who ate the fifth piece of bread. I blame it on food that was cooked, allowed to cool down, then warmed up again. Twice.

Fortunately, the other couple and I were fine, and my wife has recovered, but all four of us agree from now on we’ll only dine in restaurants where the waiters understand their role is to serve hot food, not engage customers in their own personal discussion topics.