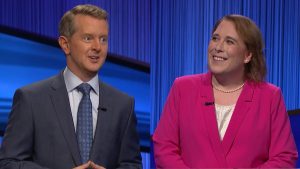 “It’s like Schrödinger’s Jeopardy! It’s happened, but it also hasn’t happened yet” — from Claire McNear’s piece on how the show’s champions have to keep their success a secret for months until their episodes air.

For players like [Amy] Schneider, whose streaks have necessitated repeat trips to Los Angeles for taping, the secrecy of a streak-in-progress is that much harder to preserve. [Ken] Jennings, for one, was forced to tip his hand to his boss, who covered for him with a series of excuses about sudden conflicts and illnesses, to the point that Jennings felt like he had a secret identity.

“Lying to everyone I know for months on end is taking a psychological toll as well,” Jennings wrote in his 2006 memoir, Brainiac. “The secret starts to make me feel a little schizophrenic. A couple days a month, I’m the Ken Jennings who’s shattered game show records, whose ever-growing daily winnings total is starting to look like a life-changing amount of money. But nobody knows about him yet. I still have to come home and be Ken Jennings the boring suburban dad, in his same old mundane treadmill of an office job, pretending nothing has happened.”