Sepinwall and Seitz Pick The Greatest TV Shows Ever 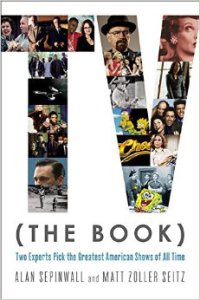 Alan Sepinwall and Matt Zoller Seitz have been arguing about television shows since they were both critics at the Newark Star-Ledger in the 1990s. Alan now writes for HitFix.com and is the author of “The Revolution Was Televised.” Matt writes for New York magazine, is editor-in-chief of RogerEbert.com, and author of “The Wes Anderson Collection” and “Mad Men Carousel.”

All these years later, Matt and Alan are still arguing about TV, which led to “TV: The Book,” in which they rank the greatest American shows of all time. When they both joined me on the air, I asked them: