Son Of A Beach 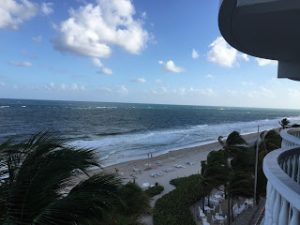 I have been a beach boy since I was a little kid. Growing up on the north shore of Long Island, it was only a ten minute drive to the eight-inch waves of Long Island Sound, and a half-hour to the roar of the Atlantic Ocean at Jones Beach (one of the best in the world). My parents taught me early how to handle the eight-foot swell and undertow, how to ride the waves in by knowing just when to start swimming, and how to get past the breakers and tread water as the calmer parts of the ocean rose and fell.

Because my birthday is at the end of July, we often celebrated at the beach, with food Mom brought in a cooler, including sandwiches that inevitably got sand in them. We listened to Dan Ingram on WABC Radio, the biggest music station in the area, as he reminded everyone laying out in the sun to “Roll Your Bod” every half-hour or so. This was long before anyone used sunscreen or had heard of SPF.

I passed along those skills to my daughter, so that she felt comfortable amidst the waves by the time she was six years old. Like me, she also liked to pick up shells on the beach and take them home, where they were soon forgotten on the top of (and eventually behind) a dresser. And I taught her how to avoid getting stung by jellyfish or having seaweed wrap around her foot.

Since moving to the midwest 16 years ago, we haven’t had as many opportunities to get to a beach. My wife and her family like to go on vacation in Ogunquit, Maine, where the sand is flat, but the water temperature is inhospitable to humans over the age of 10 (I wrote about it in this column).  We’ve gone to the Caribbean a few times, where swimming was much more pleasant, the water had that wonderful blue-green tint, and scuba diving allowed me to experience the world beneath the waves. And despite my susceptability to seasickness, there was that Jetski experience I’ll never forget.

We were at a hotel on Marco Island, on the Gulf of Mexico. My daughter was just a baby, and while my wife stayed with her, I went over to the watersports guy and rented a Jetski for a half-hour. He explained the basic operation, helped me get onboard, and pointed me in the right direction. As soon as I got past a set of buoys and out into the open water, I gunned the throttle and was quickly hurtling along the waves, loving the bounce of the machine as it skipped along. After a couple of minutes, I heard a high-pitched sound. I looked around, but there was no human or boat anywhere nearby. It took a few seconds before I realized the sound was me — screaming “whooooooo!!!!” I laughed, finished my ride, returned the Jetski, and went off to tell my wife about the experience. She said that I didn’t have to say a word; she could tell by the giant smile on my face what a good time I’d had.

This weekend, we returned to Florida, this time on the Atlantic side. As I stood there looking out at the ocean that welcomed us, the same thought occurred to me as every other time I have taken in that view — that this body of water has been pounding this shore for a very, very, very long time. It seems special to us when we’re there, but our presence means so little compared to the vastness of both nature and history. I also wondered what will happen to places like that as climate change raises the sea level and washes away all of that valuable beachfront property (there will always be land overlooking the water, but it won’t be too many decades before people who currently live inland will see the Atlantic out their kitchen windows).

I also discovered something that surprised me: I don’t love the beach as much as I used to. Perhaps because I’ve spent so much time in the intervening years swimming in chlorinated pools, the salt water tasted bitter and burned my lips a bit. Moreover, getting out to the calmer water beyond the breakers and swimming parallel to the beach wasn’t as much fun as I’d remembered. And because of knee and achilles problems I acquired two years ago, walking barefoot in the sand was awkward. I felt tendons stretching and turning in ways they shouldn’t anymore.

That won’t stop us from taking beach vacations, enjoying the view and the ocean breeze, but I’m sad that my best beach boy days seem to be in the past, where they live as happy memories.

Then again, I’ve outgrown sandwiches with real sand in them.