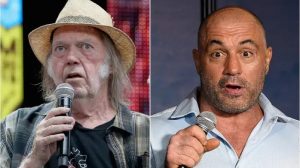 I have read quite a few articles in the last week about the Spotify/Joe Rogan/Neil Young controversy, but there’s one aspect I haven’t seen anyone else write about.

First, a quick summary. Neil Young announced late last week that he didn’t want Spotify to stream any of his music as long as it continued to carry Joe Rogan’s podcast, which is among the most popular in the country. In the days following, Joni Mitchell and Graham Nash did the same. Also, several hundred doctors and scientists wrote an open letter to Spotify asking that it no longer host Rogan’s show, because it’s been filled with so much misinformation and disinformation about COVID-19.

Spotify — which two years ago licensed Rogan’s podcast for something in the neighborhood of $100 million — flinched, but only slightly, and issued a press release saying it would add a “content advisory” around COVID-19 discussions. Of all the company’s options, that was literally the least it could do while simultaneously sending the message it’s not about to sever its ties with Rogan. So, content remains on Spotify.

People don’t seem to realize that Neil Young won; his goal was to raise awareness about covid misinfo w/an ultimatum. It worked perfectly, making headlines & getting people talking. Young doesn’t need Spotify to pay his bills; this stunt was a success.

Now, here’s my take, the overlooked aspect of all of this.

For decades, America has had a raft of companies that let the talent they employ pretty much say anything they want, regardless of how morally or ethically reprehensible it is. It’s long been true of talk radio, where the majority of voices are extreme right-wingers and Trumpists for whom the truth and facts mean nothing while they spread fear, deny science, and denounce anyone with skin darker than theirs. The same is true of cable news outlets like Fox, OANN, and Newsmax.

It’s not just a broadcast problem. It’s just as true in the tech world. With a few exceptions, YouTube has done a very poor job of monitoring the content it allows on its platform. Facebook, of course, is an absolute cesspool of this sewage, not only in the US, but globally. Twitter deserves some blame, too, though not nearly as much.

In each of these cases, as long as the money keeps flowing in, executives turn a blind eye and deaf ear to the dangerous verbiage being spewed forth on their platforms. Even during a public health crisis, when ignorance and irresponsibility are demonstrably costing people their lives, not one General Manager, Program Director, Vice President, Regional Manager, or Content Overlord has spoken up and told their employees to knock it off. They don’t even acknowledge the irony of killing off their own listeners and viewers by lying to them.

But it’s not just about COVID-19. Several years ago, before anyone had heard of the coronavirus, I stopped doing freelance radio shows for some of the stations I’d been associated with because I recognized that the other hosts were moving further and further towards Crazy Town. I rebuffed requests from at least three Program Directors who wanted me to fill in, telling them I could no longer be associated with their product. It’s not that I was taking a particularly liberal slant. I was doing general interest talk radio, including plenty of interviews with people from all walks of life. But to those stations’ listeners, the fact that I wasn’t repeating the same kind of bullshit talking points the others pounded every day made me their enemy.

Much of this was during the Obama years, so there were generous helpings of racism, lies about his heritage, and distrust of anything coming out of his administration, like the Affordable Care Act. Things didn’t get better during the Trump era, when those fire-stokers finally had one of their own to pour more gas on the flames from his bully pulpit. Now, anyone who didn’t spend every minute of every show kissing Dear Leader’s butt was a socialist who should be locked up, if not executed.

I was never under the impression that my refusing to work on those outlets would doom them in any way. There were plenty of other freelancers who’d gladly step up to the microphone and fill the airwaves with a toxic stench. But I couldn’t be a part of it, or even affiliated with it in any way. It’s one of the reasons I left Facebook a few months ago (my full explanation is here).

Which brings me back to the irresponsibility of those who have allowed things to get so out of control on their watch. That would include owners and their underlings at media outlets, streaming services, and other tech companies. How do they justify such bilge, and how can they raise children to become productive, honest members of our society?

But the problem is even bigger than Spotify’s deal with Rogan. There are plenty of classic rock stations that are owned by iHeartMedia, which happens to also be a major syndicator of exactly the type of venomous talk radio shows I’ve mentioned. Yet I don’t hear Neil Young pulling his music from them, despite those outlets being under the same corporate umbrella – and those loudmouths having a combined influence much greater than Rogan’s.

Maybe — just maybe — Spotify and others would pay more heed if it were boycotted by artists who are more popular today. Imagine if the protesting voices didn’t belong solely to Rock And Roll Hall Of Fame inductees, but big name contemporary stars like Taylor Swift, Adele, Beyonce, The Weeknd, Lizzo, Doja Cat, and Billie Eilish.

Sadly, even then, I wouldn’t expect any of the irresponsible skunks in the C-suites to order their personalities to stop spreading the noxious falsehoods. Not as long as the advertisers still buy commercials and the subscribers don’t churn away.