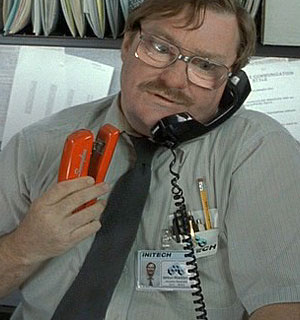 You may know Stephen Root from his voice work for a dozen years on “King Of The Hill,” or his work for the Coen Brothers in “No Country for Old Men” and “O Brother Where Are Thou?” or in dozens of other movies and TV shows. These days, you can hear his voice on the Dreamworks show “Dragons,” which airs Thursday nights on the Cartoon Network. On my America Weekend show, I asked Stephen about the difference between voice acting and live-action, who decides what the character will sound like, and how he juggles more than a dozen projects he’s doing this year alone. We also talked about the cult classic “Office Space” (that’s Root as Milton Waddams, above), HBO’s “Boardwalk Empire,” and whether he wants to return to a regular TV series like his years on “News Radio.”