Streaming Alert: “What The Constitution Means To Me” 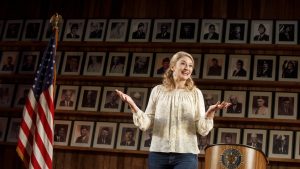 In May, 2019, I raved after seeing Heidi Schreck’s “What The Constitution Means To Me” on Broadway:

The show is mostly a monologue by Schreck about how the founders ignored women (and others) when writing the US Constitution, and about efforts — through amendments and court cases — to rectify those omissions. She begins by reproducing her original teenage arguments, then moves on to other matters that are still pressing today.

Schreck is not just a terrific playwright, but a formidable performer, as well. She mixes humor in with the serious to appeal to a modern audience, and manages to make it look like she’s ad-libbing portions, while getting choked up and emotional at others.

In the course of the show, Schreck opened up about having an abortion, and about her great-great-grandmother — a mail-order bride who was bought for $75 and died at 36 of “melancholia.” Again, from my review:

The whole thing works because Schreck is so solid as a polemicist, a feminist, a playwright, and an on-stage presence. At a time when our Constitution is being re-imagined yet again (for the worse), she has given us her own living, breathing document as a statement on not just our times, but our history.

I’m bringing up “What The Constitution Means To Me” again because, before ending her Broadway run, Schreck had one performance filmed by director Mari Heller, and that production begins streaming on Amazon Prime Video tomorrow (10/16/20). I strongly recommend it.

The play takes on even more relevance this week, with the Senate set to confirm Amy Coney Barrett as a Supreme Court Justice who will likely reverse Roe v. Wade and many of the other gains in reproductive and other women’s rights.

You can read my full original review here.