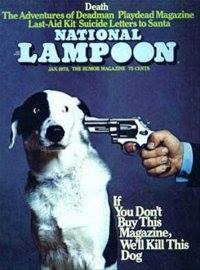 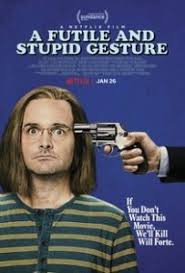 As a teenager, I was a fan of the National Lampoon. I subscribed to the magazine, listened to the radio show, and bought the Radio Dinner vinyl album. It’s fair to say that the satirical sensibilities of both the Lampoon and Mad magazine (along with Woody Allen and Mel Brooks) contributed greatly to my warped sense of humor in that era.

I knew the names of all the Lampoon writers and editors, in particular Doug Kenney, who — with his fellow Harvard Lampoon alumnus Henry Beard — founded the national magazine. He also co-wrote the “1964 High School Yearbook Parody” and “Bored Of The Rings,” as well as contributing to the Radio Show and then the stage show “National Lampoon’s Lemmings.” His crowning glory may be scripting the twofer that created a new genre of movie comedies, “Animal House” and “Caddyshack.”

That’s why I was so entertained by “A Futile and Stupid Gesture,” a movie about Kenney that’s now streaming on Netflix. It’s not a documentary, and you can’t call it a docudrama. Will Forte plays Kenney, who died at 33 when he fell or jumped off a cliff in Kauai, Hawaii (his colleague Harold Ramis said, “Knowing him, Doug probably fell while he was looking for a safe place to jump”).

Because this movie has a Lampoon-ish feel to it, it’s not all that odd that Martin Mull narrates the movie on camera as the older Doug Kenney — despite the fact that he’s 74 and Kenney didn’t live half that long. That allows Mull to pop up in the middle of a scene to comment on the proceedings with lines like: “These actors don’t look exactly like the people they’re playing. But, come on, do you think I looked like Will Forte when I was 27? Do you think Will Forte is 27?”

Two others deserve special mention. Lonny Ross, who was on “30 Rock,” was cast as Ivan Reitman because he has the exact same hangdog face. And a guy I’d never seen before, Erv Dahl (who was on a celebrity impersonator reality show in 2007), does the best Rodney Dangerfield I’ve heard since Brad Garrett. In fact, at first, I thought the producers of this movie had dubbed in Rodney’s own words before realizing none of those things could ever have been recorded if and when he said them — but they sure sound like it coming out of Dahl’s mouth.

As for the title, “A Futile And Stupid Gesture” comes from a scene in “Animal House” in which the Deltas are all sitting around mourning the fact that Dean Wormer has thrown them out of Faber College. Bluto (John Belushi) riles them up with a short speech, interrupted by Stork (played by Doug Kenney), who gets his only line in the movie: “What the hell are we supposed to do, ya moron?” Soon, Otter (Tim Matheson) jumps up to suggest, “This situation absolutely requires a really futile and stupid gesture be done on somebody’s part!” Everyone agrees that they’re just the guys to do it.

The value of the Lampoon brand deteriorated tremendously after about a decade, so by the mid-1980s, with most of the original writers, editors, and staff long gone, I stopped paying attention to it (as did pretty much its entire readership). The magazine limped along for a few more years, then was bought by a company that just wanted the National Lampoon name, which it attached to truly horrible movies that seem to have played nowhere but late at night on Cinemax, with titles like “Dorm Daze,” “Barely Legal,” and “The Legend of Awesomest Maximus.”

In 2013, Ellin Stein wrote a terrific book about the history of National Lampoon, “That’s Not Funny, That’s Sick” (listen to my conversation with her about it here). There was also a good 2015 documentary on the subject called “Drunk Stoned Brilliant Dead.” Now we have this third look back at the era, as told through one of the men who led that comedy renaissance.

If you were ever a fan of Doug Kenney and the original Lampoon gang, you’ll enjoy “A Futile And Stupid Gesture.” I give it a 9 out of 10.