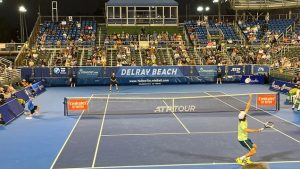 While in Florida on vacation last week, my wife and I attended our first professional tennis tournament, the Delray Beach Open.

We got tickets for two quarterfinal matches on Friday night in which — since she’s the big tennis fan in our family — she knew all four of the players. The first match was between Adrian Mannarino of France and Reilly Opelka, a Delray native who won the DBO in 2020. The latter stands 6’11” and has an overpowering serve, including one at 136mph. It took three sets, but Opelka won.

Then we watched John Millman (Australia) vs. Grigor Dimitrov (Bulgaria) in what looked to be another close battle. After Millman tucked away the first set, Dimitrov got out to a 3-1 lead in the second, but Millman came roaring back and won.

Seeing it live gave us a chance to see the mechanics of a pro tennis event. As has become standard on the tour, there were no linespeople calling balls in or out. The process was automated, with about a dozen cameras perched high with views of distinct parts of the court and a recorded voice calling “fault” or “out” when necessary. Actually, there were two voices (one male, one female) for alternating games, and I wondered whether the server got to choose which they preferred, as I can with Siri on my iPhone.

One of the odd things about the Delray Beach Open was that there was a brand-new BMW parked in one corner, representing one of the sponsors. The vehicle’s windows were open, and I thought they should offer it as a prize to any player who hit one into the driver’s seat, but no. It wasn’t completely out of the way. In fact, earlier in the week, one player had run into it while trying to return a cross-court smash. While we were there, everything had to stop in the second set of the first match when the BMW’s lights suddenly came on, distracting Opelka’s service motion. The chair umpire got on his walkie-talkie and, within a minute or two, whoever had the keys not only remotely turned off the lights, but closed the windows, too.

Because of COVID, the ball kids no longer touch the players’ towels. Instead, the players have to place and retrieve them from baskets at their end of the court. That probably should have been the case even before the pandemic, because who wants to handle a tennis player’s sweaty towel?

I purposely got tickets in an end section instead of on the side, so we didn’t have to keep turning our heads back and forth to see the action. Plus, we got a great view of the ball curving through the air on slices or dropping quickly due to topspin — details that are harder to notice on TV.

Even though I haven’t played any tennis for more than a decade, there were times when I told myself I could still do what those pros did. Okay, I only thought that when they volleyed into the net or hit a passing ball too long. I’m not insinuating that I could even get a racket on one of Opelka’s screaming serves, but missing an easy overhead by a mile? Been there, done that.

One of the things unique to tennis is that the opponents warm up with each other for several minutes before their match. You’ll never see a Cardinals pitcher throwing batting practice for the Cubs, or Steph Curry rebounding three-point attempts for LeBron James before a game, but it happens at every tennis competition, from recreational play right up to the top pros. I think it may also be the only sport in which players are barred from talking to their coaches, even between games, although Opelka was able to get a new pair of sneakers from his team between sets.

Despite beautiful weather, the stands were only half-full, but those who were there got to see some really good players. I’m glad we were among them. By the way, England’s Cameron Norrie beat Opelka in straight sets in the final Sunday afternoon. taking home about $90,000 in championship money.