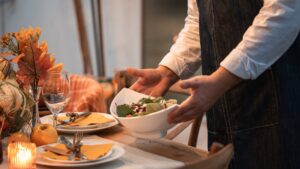 On Thanksgiving Day, most of our extended family was celebrating the holiday in other towns with other people, so it was just three of us at our house — me, my wife, and our daughter, who took Amtrak down from Chicago to spend a week in her old bedroom.

Since our daughter is vegan, she stayed home and cooked for herself while Martha and I opted to go someplace for turkey and all the trimmings. But where? We had tried this a few years ago at a restaurant offering a Thanksgiving buffet, but it was terrible, and we swore never to do that again.

Fortunately, the Riverfront Times posted a piece a couple of weeks ago about 50 places in the St. Louis area where we could pick up an entire meal to take home or go there and be served by their staff. We did a bit of research and made a reservation at J. Gilbert’s, a restaurant we had liked in the past but inexplicably hadn’t been back to in many years.

On the big day, we arrived to find the place pretty full, but we were seated within minutes. I was a little wary because the table next to ours had a family of six consisting of two adults and four children who appeared to be in the four-to-eight-years-old range. I expected at least one of the kids to be unruly at some point, but they all turned out to be remarkably well-behaved. They ate the same food their parents did, never distracted other diners, and none of them pulled out an electronic device of any kind throughout the meal. No phones, no tablets, no Game Boys, nothing. I was going to go over and compliment the parents, but they finished eating before we did and were up and out before I had an opportunity. Good for them.

As for us, I’m happy to say every single bit of the Thanksgiving meal — squash soup, followed by the traditional turkey with gravy, stuffing, green beans, mashed potatoes, topped off by chocolate cake at the end — was absolutely terrific. I was also pleased to note that the restaurant was not short-staffed, as so many are these days, which means a lot of people gave up their holiday to make ours better. For that, I was truly thankful, and tipped accordingly.

And neither Martha nor I looked at our phones the whole time, either.